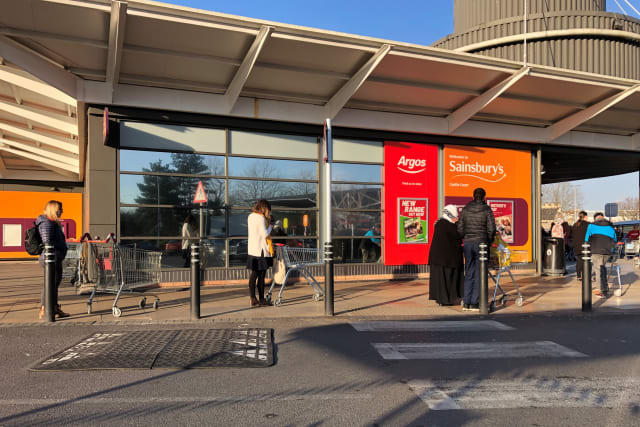 Shoppers need to be sensible and take responsibility for their own social distancing when they go to busy supermarkets, a professor of infectious diseases has urged.

While there has been much condemnation of the high numbers of people who went to parks and rural areas over the weekend, the nation’s supermarkets are attracting crowds of people every day.

Trade union for shop workers Usdaw has called on retailers to limit the number of customers in store at any one time, and is urging customers to maintain physical distance and shop alone if possible.

The union said there were “scenes of mayhem” over the weekend, and questioned whether the Government advice is clear enough.

Dr Stephen Baker, professor of infectious diseases from the Department of Medicine at the University of Cambridge, said people should try to avoid shops when they are particularly busy or when they see a queue outside.

He told the PA news agency: “Over the weekend I went to my own supermarket and there were queues, and obviously it’s more difficult to maintain social distancing in that kind of environment.

“The whole thing about controlling this is about being sensible, right? So we have to maintain social distancing with a view of avoiding sustained contact with large groups of individuals.”

He pointed out that it is difficult to avoid contact with others on a trip to the supermarket, and the only way around that would be to limit the numbers of people allowed inside at any one time.

“But then that would also create chaos with people queuing outside which isn’t going to help,” he said.

Prof Baker said measures that are feasible include sustained distance between people queuing for tills and customers not spending too long in the store.

“If it is really busy, and you’re aware that it’s really busy, and there are people queuing outside, then clearly it may be good if you can come back at another point to avoid putting yourself in an environment where you’re just making the problem worse,” he said.

Prof Baker added: “More could be done on the basis of the public being more sensible with the way that they perceive the risk.”He said “all of us” are potentially transmitters of the disease and the more we interact with people, the more likely we are to transmit it.

“It’s not just about being responsible for yourself, and thinking about your own health issues which could be a problem of course, but also then it’s making sure that we’re responsible for the more vulnerable measures of society,” he said.

Prof Baker said people should employ common sense when it comes to hygiene and the products they bring home from supermarkets.

He said bread should go into bags straight away and recommended washing fresh fruit and vegetables as normal.

“Things that are in packages, I would maintain a degree of common sense with the view that they are unlikely to make anybody sick,” he said, adding that wet wipes or alcohol wipes could be used if there are any concerns.

Paddy Lillis, general secretary of shopworkers trade union Usdaw, said: “We are deeply concerned about how the behaviour of a minority is causing problems in retail and we are questioning whether Government advice is clear enough.

“This weekend we saw some scenes of mayhem as customers continue to panic-buy when there is absolutely no need.

“If we are going to abide by social distancing then we must not have overcrowded supermarkets.

“A big concern for our members was to see essential workers and vulnerable people unable to access ‘golden’ shopping hours because of crowds of people around the stores.

“It would be an appalling situation if police had to patrol supermarkets because shoppers refuse to calm down, taking them away from other vital duties, but if there is public disorder, they have to respond.”

Mr Lillis added: “We also need strict rules for the shopping public, the current advisory approach is plainly not working.”

He said the situation in some places is “chaotic and out of control”.

Home Secretary Priti Patel said it is “not appropriate for police officers to be inside supermarkets” as she said that “everyone should behave responsibly”.

The purpose of the screens is to help people follow social-distancing advice.

David Potts, chief executive of Morrisons, said: “We want to do our bit to help customers and colleagues from being affected and to help everyone observe social distancing at our checkouts.

“This will help us to continue to play our full part in feeding the nation – it’s more than our job.”

Morrisons is also issuing hand sanitiser to checkout operators at all stores and redeploying colleagues who are vulnerable to the virus where possible.