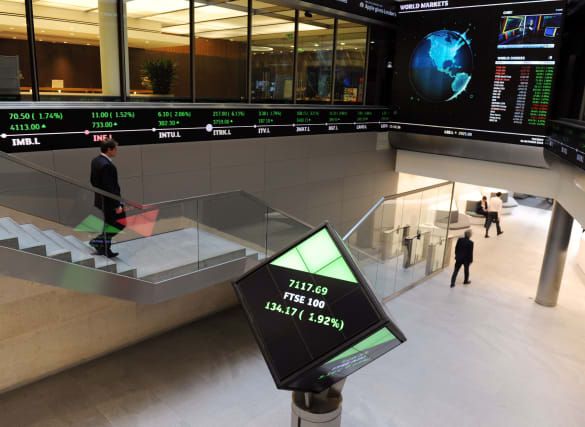 The European market rebound at the end of last week was wiped out in early trading on Monday as deadlock over the US stimulus package unnerved traders.

All but two FTSE 100 firms opened in the red, as firms with high international exposure took a particularly hard hit.

The index, which contains the biggest 100 companies on the London stock exchange, has faced a rough month, but reported gains in its previous two trading days.

However, this came to an abrupt end on Monday morning as the UK index took the biggest hit after Democrats in the US Senate blocked the latest financial package on Sunday evening.

Senate minority leader Chuck Schumer described the stimulus deal as a “large corporate bailout with no protections for workers and virtually no oversight” as the opposition party blocked the move.

Connor Campbell, financial analyst at Spreadex, said: “Europe’s meagre rebound managed at the end of last week was quickly wiped out come Monday morning, as investors woke up to partisan deadlock over the proposed US stimulus plan.

“Even if the reasons behind the Democrats’ intransigence are sound, America’s inability to move things forwards stands in contrast to many of its now free-spending peers and has sent the market into another tailspin.”

UK firms with high exposure to the US led the fallers, with Carnival and Ferguson both falling by more than 10% in early trading.

The supermarkets continued to outperform the market, with Morrisons and Sainsbury’s the only two risers at the start of trading.

The other major European markets were not far behind the FTSE’s decline, with German Dax falling by 4% and the French Cac 40 falling 3.7%.

Trading caution also saw sterling fall, slipping back against the dollar and euro after its own rebound at the end of last week.

Craig Erlam, senior market analyst at OANDA Europe, said: “Oil suffered one of its worst weeks ever, last week, and it could be in for another rough ride.

“Given the scale of the losses endured already, you have to question just how much lower it can feasibly go but, as is the case with stocks, the outlook is so unclear that beyond price alone, there isn’t much of a bullish case.”