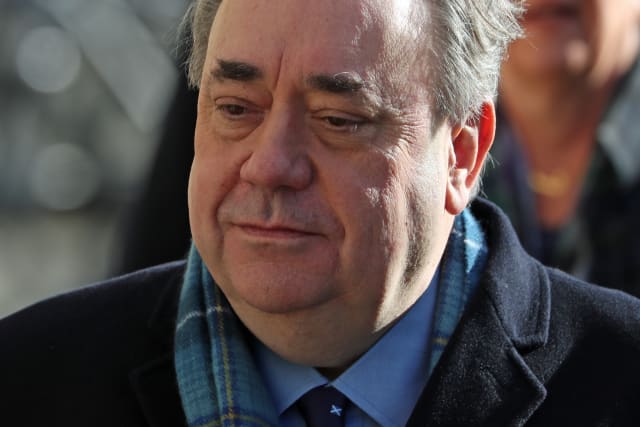 Alex Salmond has been cleared of sexually assaulting nine women following an 11-day trial at the High Court in Edinburgh.

The former first minister of Scotland was found not guilty on 12 charges and not proven on one charge of sexual assault.

A charge that had originally been on the indictment was dropped earlier in the proceedings.

Here are some of the key moments in the trial.

The former first minister of Scotland told the High Court in Edinburgh he is a journalist, TV presenter and retired politician.

Wearing his signature Saltire tie, he stood at the witness stand with his clenched fist punctuating statements.

“From where I stand now, I wish I had been more careful with people’s personal space but there was no intention whatsoever to offend,” Mr Salmond said.

“But I’m of the opinion, for a variety of reasons, that events are being reinterpreted and exaggerated out of all possible proportion.”

Gordon Jackson QC, representing Mr Salmond, then said two of the 13 charges “jump out as being more serious” – the attempted rape and sexual assault with intent to rape.

The former never happened, Mr Salmond said, while he claimed the second complainer had a “legitimate grievance” but there was never any intention to take things further than a “sleepy cuddle”.

As prosecutor Alex Prentice QC walked up to the lectern to cross-examine Mr Salmond he was assertive and direct.

“Did you give any consideration to (the woman’s) feelings for one moment?” asked Mr Prentice.

He moved on to the most serious of allegations, and tried to assert Woman H had been at a dinner in June 2014 – which Mr Salmond disputed.

“You attempted to rape her,” he said.

“I did not,” Mr Salmond replied. He told the jury Woman H was not even there.

The attempted rape was the most serious charge Mr Salmond faced.

Woman H claimed it took place in Bute House after a dinner in June 2014.

Mr Salmond said the former Scottish Government worker was not at the official residence that evening and only knew about the engagement through knowledge of his whereabouts.

He said she was “annoyed” because he did not help her with a political project.

Woman H was the first in the trial to give evidence.

Hands spread apart on the table in front of her, she joked “thanks” after telling the Crown prosecutor her age.

The former Scottish Government worker was in court because she alleged Mr Salmond sexually assaulted her in May 2014 then tried to rape her the following month.

Mr Salmond said the sexual assault did not happen but they had a consensual encounter the previous year. She was not at a dinner in June, he said.

Woman H was emphatic that the consensual liaison never took place, nor would she ever want it to.

Jurors were shown a recording of a police Skype interview of a guest who had been there on the night in question.

When asked who had been at the dinner, he said there were four people – himself, Mr Salmond, a woman involved in Scottish business and Woman H, he thought.

Mr Salmond’s defence argued Woman H had never been at the meal.

The defence called the Scottish businesswoman as a witness.

She told the court she was friends with Woman H but had no “recollection” of her being there that evening.

Claims of a policy against Salmond working alone with women

It was under cross-examination from Mr Salmond’s lawyer Mr Jackson that the court first heard claims women were being stopped from working with the then-first minister.

The witness known as Woman G told the court Mr Salmond sexually assaulted her twice, which he denied.

Mr Jackson said: “What worries me is there’s things that were thought of as nothing that have all these years later become criminal – nobody thought this was serious.”

The lawyer was referring to the former first minister being accused of grabbing the woman’s bottom – or ushering her up the stairs – then making alleged sexual remarks to her in Bute House.

The witness replied: “It was serious enough for us to change staffing procedures around him – I thought it was extremely serious.

“It was serious enough we determined that women weren’t allowed to work with him alone unaccompanied.”

Three male civil servants later said this policy had been put in place.

Mr Salmond denied knowledge it ever had, as did two defence witnesses.

Mr Salmond’s lawyers described him as a “tactile”, “old-fashioned” sort of man.

That was in stark contrast to Mr Prentice’s description of Mr Salmond as a “sexual predator” and having no “licence to grope” women.

In his closing speech, Mr Prentice told the jury the former first minister abused his position of power to satisfy his desires without punishment.

He said: “The Crown’s submission to you is this case is not about a plot and political conspiracy.

“It is about a powerful man who abused his power to satisfy his sexual desires with impunity.”

He told the jury Mr Salmond’s “conduct over the span of the charges was intimidating, humiliating, degrading and created an offensive environment”.

Mr Jackson began the closing speech for the defence by walking up to the lectern wearing a tilted wig and facing the jury.

He told the nine women and six men Mr Salmond could have been a “better man” but the case involved “very serious criminal charges”.

The lawyer repeated the line put to the jury by Mr Prentice on the previous day – there are “patterns” – but different ones entirely, “sinister patterns”.

Something “stinks” about these matters becoming criminal all these years later, he said, adding it was “scary”.

He said: “I can’t prove it but I smell it. There’s something not right.”

Mr Jackson accepted Mr Salmond could be inappropriate, adding “so what”.

He told the jurors Mr Salmond could shout and “bollock” and be a “bugger to work for” but there was no proof he had passed a criminal threshold, he said.