Digger used in midnight ram-raid on ATMs at Tesco store 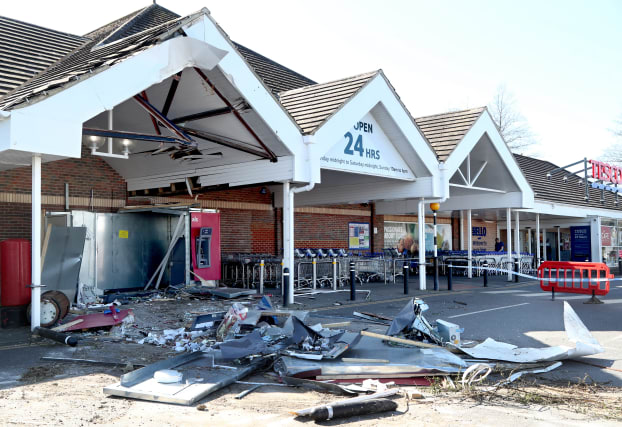 Thieves have used a huge digger to carry out a ram-raid on a Tesco Extra store in Kent.

ATMs were ripped from the wall in the midnight heist and two police vehicles which tried to stop the criminals getting away were smashed.

The raid comes as staff at supermarkets across the country have been working around the clock during the coronavirus crisis to ensure shelves are stocked ready for openings.

Tesco said the Whitfield store near Dover remained open on Monday as police launched an investigation to track down those responsible.

Police say that two cash machines were wrenched off the wall and loaded onto a flat-bed truck during the raid at about 12.30am on Monday.

It is not yet known how much cash was in the ATMs.

The truck carrying them off was driven away in convoy with two Mitsubishi Shoguns.

Officers tried to stop the group but two police vehicles were rammed and damaged in Old Park Hill in Dover during the getaway.

Detectives are urgently trying to locate those responsible.

Anyone who witnessed the incident or has CCTV or dashcam footage that may assist the investigation is urged to call the appeal line on 01622 604100, quoting reference 46/52654/20.

You can also call the independent charity Crimestoppers anonymously on 0800 555111 or complete an online form at www.crimestoppers-uk.org.

A Tesco spokesman said: “Our Dover Extra is open and serving customers as normal following the incident last night and we’re helping police with their inquiries.”