Covid-19: PM to address the nation after Britons told to return to UK 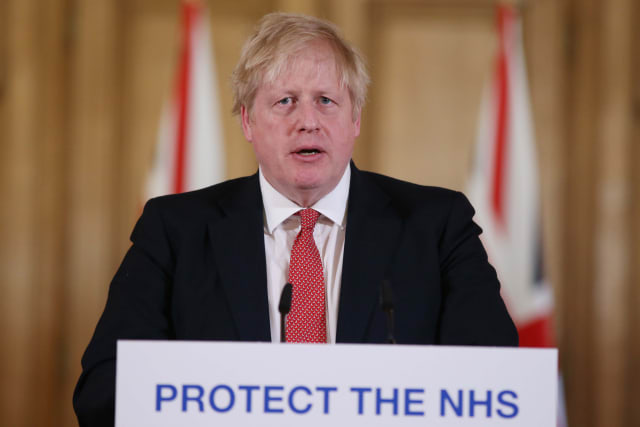 Boris Johnson is to announce new measures on tackling the coronavirus outbreak, after all Britons travelling abroad were told to return to the UK “while you still can”.

The Prime Minister will deliver an address to the nation from within No 10 at 8.30pm on Monday amid widespread calls for tougher measures to slow the spread of Covid-19.

His statement will come after Foreign Secretary Dominic Raab told citizens travelling overseas to return to the UK using commercial routes that are still running.

“If you are on holiday abroad the time to come home is now while you still can,” he said.

Foreign Office staff were working to help citizens get back where routes have been halted due to the growing crisis.

In the UK, the death toll hit 335 as the World Health Organisation (WHO) warned the global pandemic is “accelerating”.

In a sign that the nation could be moving towards a stricter lockdown, Health Secretary Matt Hancock said the Government was willing to take “more action” if needed to stop coronavirus from spreading.

Mr Johnson scrapped his planned daily press conference and instead scheduled a pre-recorded address to the nation.

Shops except for pharmacies and food retailers could be ordered to shut under measures being considered by all UK leaders.

Under emergency legislation being discussed by MPs on Monday, airports could shut and police would be able to force people with virus symptoms to isolate.

Elsewhere, Dr Tedros Ghebreyesus, director general of the WHO, told reporters the pandemic is accelerating.

He said: “More than 300,000 cases of Covid-19 have now been reported to WHO, from almost every country in the world.

He said asking people to stay home and other social distancing measures are important to “buy time”, but added: “They’re defensive measures.

“To win, we need to attack the coronavirus with aggressive and targeted tactics – testing every suspected Covid-19 case, isolating and caring for every confirmed case, and tracing and quarantining every close contact.”

Over the weekend, photos emerged showing crowds of people visiting open spaces across many parts of the UK.

The Government has said it is safe to exercise as long as people keep at least two metres away from other people.

But Labour urged ministers to act now by moving to “enforced social distancing”.

Speaking on BBC Radio 4, Mr Hancock said he did not know why some people were ignoring the Government’s advice.

“It’s very selfish,” he said. “The NHS is doing everything it can and preparing for the spread of this virus.

“If people go within two metres of others who they don’t live with then they’re helping to spread the virus – and the consequences of that costs lives and it means that, for everyone, this will go on for longer.”

Mr Hancock said ministers were prepared to take stricter measures to clamp down on the spread of the virus if necessary.

Asked by the BBC whether he would move to telling people not to go out at all rather than simply advise against it, he said: “Yes, and on Saturday I signed the order to give the police the power to be able to shut bars, restaurants and pubs if they are still open.”

When it comes to testing medical staff for Covid-19, Mr Hancock said he hoped this would take place “as soon as possible”.

And he said the Government has confirmed that all major hospitals have received deliveries of personal protective equipment (PPE) needed by frontline staff and that a hotline has been set up for NHS workers to ring if there are shortages in their area.

Mr Hancock also told the BBC that 12,000 ventilators are now available after last week’s appeal by the PM, up from 5,000 that the NHS had access to previously.

Labour’s shadow health secretary Jonathan Ashworth said: “After another weekend of apparent public confusion and widespread non-compliance with ‘social distancing’, of grave scientific warnings and brave medical professionals talking of being sent to work like ‘lambs to the slaughter’ with inadequate protective equipment, something has to change.

It comes as Wendy Jacobs, a head teacher at Roose Primary School in Barrow-in-Furness, Cumbria, died after testing positive for coronavirus.

In Walsall, a 36-year-old nurse and mother-of-three is on a ventilator in intensive care after contracting coronavirus.

Areema Nasreen is in a critical condition at Walsall Manor Hospital in the West Midlands where she works.

There are growing fears that Britain is on a similar trajectory to Italy – scene of the world’s worst outbreak – where the death toll passed 5,000 over the weekend.

The Italian government was one of a number of European countries to announce new or extended restrictions – with Germany banning public gatherings of more than two people not from the same household.