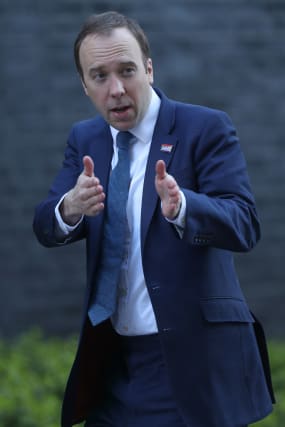 People who are ignoring social distancing advice to stay two metres apart are “very selfish”, the Health Secretary has said as he indicated further measures could be brought in to tackle Covid-19.

In a sign that the UK could be moving towards greater lockdown, Matt Hancock said the Government was willing to take “more action” if needed to stop coronavirus from spreading.

Over the weekend, photos emerged showing crowds of people visiting open spaces across many parts of the UK.

The Government has said it is safe to exercise as long as people keep at least two metres away from other people.

Emergency legislation that would grant powers aimed at tackling the pandemic will be debated by MPs later.

Speaking on BBC Radio 4, Mr Hancock said he did not know why some people were ignoring the Government’s advice.

“It’s very selfish,” he said. “The NHS is doing everything it can and preparing for the spread of this virus.

“If people go within two metres of others who they don’t live with then they’re helping to spread the virus – and the consequences of that costs lives and it means that, for everyone, this will go on for longer.”

Mr Hancock said ministers were prepared to take stricter measures to clamp down on the spread of the virus if necessary.

Asked by the BBC whether he would move to telling people not to go out at all rather than simply advise against it, he said: “Yes, and on Saturday I signed the order to give the police the power to be able to shut bars, restaurants and pubs if they are still open.

“These are unpleasant and very difficult times.”

Asked whether the Cabinet would be considering a firmer lockdown when it meets on Monday, Mr Hancock said: “Nothing is off the table. Of course we are looking at what other European countries are doing.”

And he said he hoped that the testing of medical staff would take place “as soon as possible” so that doctors, nurses and other NHS workers who may not have the virus but are self-isolating can get back to work.

He told BBC Breakfast: “We are rapidly expanding testing. We have been buying testing kits over this weekend and all of last week to make sure we have as much as possible.”

He said he hoped to say more about the expansion of tests in the next few days.

The Government has confirmed that all major hospitals have received deliveries of personal protective equipment needed by frontline staff and that a hotline has been set up for NHS workers to ring if there are shortages in their area.

“I’m working day and night to get this protective equipment to the frontline,” Mr Hancock said.

“We have got enough of it. Of course we are going to need more and we are buying it too.

“But it is about distributing it to the frontline.

“We have done two things over the weekend. First, we have got a shipment out to all the major hospitals and the second is we now have a helpline so that if you are on the frontline and you can’t get access to the equipment you need, you can phone in so we know where the shortages are.”

Mr Hancock also told the BBC that 12,000 ventilators are now available after last week’s appeal by the PM, up from 5,000 that the NHS had access to previously.

For Labour, shadow health secretary Jonathan Ashworth said ministers should be making “immediate preparations” for the “next stage” of tackling Covid-19 while learning from other European nations.

The calls came as an 18-year-old was thought to have become the youngest victim of the virus in Britain as the number of deaths in the UK rose to 281.

In Walsall, a 36-year-old nurse and mother-of-three is on a ventilator in intensive care after contracting coronavirus.

Areema Nasreen is in a critical condition at Walsall Manor Hospital in the West Midlands where she works.

There are growing fears that Britain is on a similar trajectory to Italy – scene of the world’s worst outbreak – where the death toll passed 5,000 over the weekend.

The Italian government was one of a number of European countries to announce new or extended restrictions – with Germany banning public gatherings of more than two people not from the same household.

Meanwhile, respiratory doctors and nurses at Belfast Trust launched a video on Twitter saying people should stay at home to save lives.

One medic there said she has been a doctor for 35 years, adding: “I’m Susie, we are facing our greatest challenge and we are frightened … please stay at home.”

She said her latest shift had been a “deeply, deeply eye-opening” experience with previously fit and healthy people in their 30s and 40s “attached to machines, fighting for their lives”.

“The Prime Minister has been blase about this from the start, waiting for others to make decisions so he doesn’t have to. It is costing lives,” she said.

“Enough is enough. The NHS cannot cope and it won’t be long before doctors have to choose between who lives and who dies.”

While people were heading to open spaces, there were signs that city and town centres were closing down with Nando’s, Costa Coffee, McDonald’s, John Lewis, Primark and Timpson among the high street chains to announce they were closing their doors.

Meanwhile, letters are going out to 1.5 million people with underlying health conditions who are considered to be the most vulnerable to the coronavirus telling them to stay at home for the next 12 weeks.

The Government said it would ensure those without families and friends to support them would continue to receive food and medicines, with the military helping to organise deliveries.