Asian shares and US futures sink amid deepening virus crisis 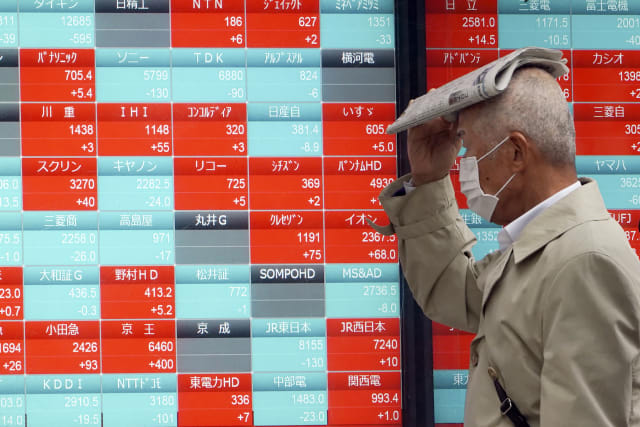 US futures slipped more than 3% on Monday and share benchmarks in many Asian markets logged sharp losses as more governments tightened restrictions to fight the coronavirus pandemic.

India’s Sensex plummeted 12.1% after a sharp drop on the open triggered a circuit breaker halt to trading.

Singapore’s benchmark plunged 7.7% after the city announced a sharp increase in confirmed infections and its first two deaths.

Investors appeared to be encouraged by the likelihood the International Olympic Committee might postpone, rather than scrap, the Tokyo Games.

In the US, top-level negotiations between congress and the White House continued after the Senate voted against advancing a nearly two trillion-dollar (£1.71 trillion) economic rescue package. Another vote is expected later on Monday.

Markets reopened to an altered business landscape as lockdowns and closures intended to halt the spread of the new coronavirus expanded over the weekend to include many cities around the world, and the number of people infected surged past 336,000.

“Risk aversion appears here to stay as investors become more fearful that this could be the worst global recession during peacetime,” Edward Moya of Oanda said in a commentary.

“Every passing day it seems lockdown efforts are intensified globally thus it seems financial markets will remain nervous until we see the infection rate improve in both the US and Europe,” Mr Moya said.

Australia announced a 66.4 billion Australian dollar (£33 billion) stimulus package on Sunday. That is in addition to an earlier mandated 10 billion dollar (£8.5 billion) package and other stimulus from the central bank.

Stocks fell sharply on Wall Street and the price of oil sank again on Friday as New York became the latest state to decide that nearly all workers should stay at home to limit the spread of the coronavirus.

This week will bring fresh data which will likely underline the damage to Asian economies from the outbreak of the virus which originated in China.