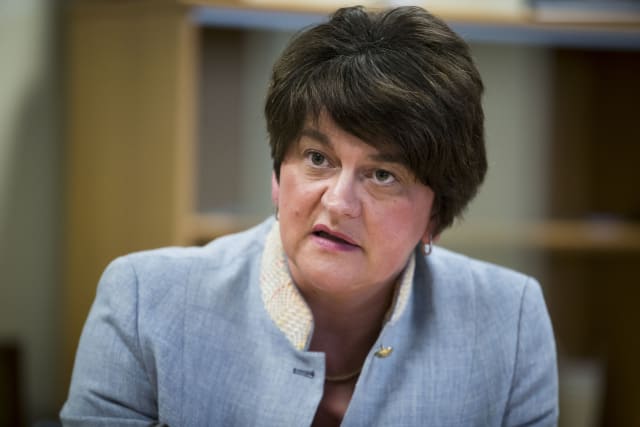 The Prime Minister’s new restrictions on life should be followed to save lives, Stormont’s First Minister has said.

People must remain at home except for shopping for basic necessities, exercise, any medical need and travelling to and from essential work, Boris Johnson said.

Arlene Foster said: “We need to follow this advice to save lives and protect our hospitals.

“People should stay in unless it’s essential to go out. It won’t be easy but it’s for the best.”

Shops selling non-essential items were told to shut, and gatherings in public of more than two people who do not live together are banned.

“We fully endorse his call for people to stay at home and to obey these restrictions – it is the only way we can reduce the pressure on the NHS and to save lives.”

A third patient with Covid-19 has died in hospital in Northern Ireland, Stormont’s health minister said.

The victim, in their late 60s, died in the Greater Belfast area and had underlying health conditions.

Robin Swann said: “This is the third tragic announcement of this kind I have had to make in recent days.

“The lethal threat from this virus is very real and we all have to do everything we can to combat it.”

Mr Swann has already warned that 15,000 people could die in the region if steps are not taken to limit the spread of Covid-19.

Emergency powers passing through Westminster on Monday are expected to be formally introduced in Northern Ireland on Tuesday after MLAs vote on a legislative consent motion tabled by Mr Swann.

He said: “When we see the response of some people in the general public it’s what’s actually needed here in Northern Ireland, and we’ll have to enforce that.

“Those draconian measures will save lives – it’s as simple as that.

Ulster Unionist Mr Swann said the death toll in Northern Ireland could “rapidly dwarf” the numbers who died during the Troubles.

Asked to react to images of people gathering in large numbers in public places over the weekend, Mr Swann replied: “I couldn’t fathom the selfishness of those individuals.

“Those people who don’t see social distancing as their responsibility, they’re selfish, and they will put enormous pressure on our health service, if not end the lives of their loved ones.”

Mrs Foster said: “If people don’t follow the guidelines the coronavirus will spread, it will surge and result in a wave of deaths as our hospitals come under intense pressure to deal with the amount of cases coming through their doors.”

She referenced the case of Mark McClurg – a 40-year-old pastor from Co Down with no underlying conditions, who is being treated for Covid-19 in intensive care – to highlight the risks to all age groups.

Deputy First Minister Michelle O’Neill, who earlier broke down in the Assembly chamber as she fielded questions about the crisis, accused those disregarding social distancing advice of effectively “killing people”.