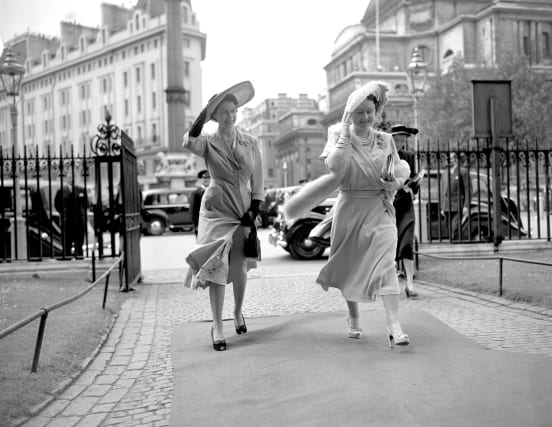 The Duke and Duchess of Cambridge have shared a poignant message on Mother's Day, alongside treasured photos and a card Prince George made for Kate.

William and Kate's @KensingtonRoyal account said: "To mothers new and old and families spending today together and apart – we are thinking of you all at this difficult time."

Their images included a previously unseen one of the duke and duchess giving George and Princess Charlotte a piggyback, one of William and brother Prince Harry, now the Duke of Sussex, as youngsters with their late mother, Diana, Princess of Wales, and one of Kate as a baby in the arms of her mother, Carole Middleton.

The royal family shared a black and white image of the Queen, then Princess Elizabeth, in 1951 with her mother, Queen Elizabeth, holding on to their hats as they arrived at Westminster Abbey for a wedding.

On Instragram, a message said the royals were thinking of mothers everywhere on what could be "a different and difficult day" as the nation is urged to avoid visiting their parents amid the coronavirus pandemic.

The message read: "Mothering Sunday is a chance to thank and celebrate all mothers and caregivers, wherever they may be.

"Today may be a different and difficult day for those who would usually plan to spend time with their mothers, as we adapt to the necessary changes and disruption to our normal routine and regular patterns of life.

"But for all Mums everywhere, we are thinking of you, and wish you all a very special #mothersday."

Clarence House wished people a Happy Mother's Day "particularly in a year when families may not be able to be together".

The post featured an image of a young Prince Charles playing in the Clarence House garden with his mother in 1950.