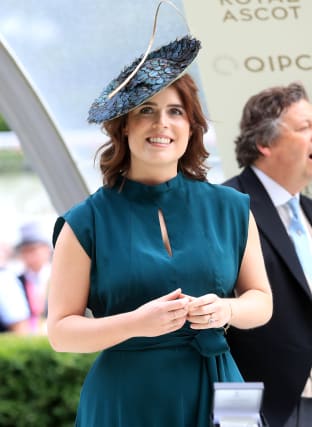 Princess Eugenie’s 30th birthday has been marked by a message of goodwill posted on the official royal family Twitter account.

The social media post was accompanied by a photo taken last year showing Eugenie with her grandmother, the Queen, at the Maundy Thursday Service in St George’s Chapel at Windsor Castle.

Eugenie’s milestone birthday will no doubt be very low-key as the nation is being urged to stay at home to halt the spread of the coronavirus pandemic.

The princess, who is the youngest daughter of the Duke of York and Sarah, Duchess of York, has shared a campaign on her Instagram Stories, urging people to give a national round of applause to NHS workers from their doors, balconies and windows at 8pm on Thursday.

But the royal nuptials of her sister, Princess Beatrice, to millionaire property tycoon Edoardo Mapelli Mozzi in May, have been thrown into disarray.

Her wedding reception in the Buckingham Palace gardens has been cancelled because of the Covid-19 outbreak, and churches are limiting those attending marriage ceremonies to just the priest, the bride and groom and two witnesses.

Eugenie’s mother, Sarah, has said the past six months have been hard on her and her daughters with the scandal that has engulfed Andrew.

The duke retired from public royal duties in November after his disastrous Newsnight interview about his friendship with convicted sex offender Jeffrey Epstein.

Andrew has strenuously denied claims by Virginia Giuffre that he slept with her when she was 17 after she was trafficked by Epstein.

The duke is facing calls to talk to the FBI and US prosecutors, but has previously been accused of having “completely shut the door” on any co-operation.

Princess Eugenie Victoria Helena of York was born on March 23 1990 at the exclusive Portland Hospital in London.

In a week-long name game, Andrew and the duchess kept the nation guessing as to what they would call their daughter.

Their unusual choice generated much surprise and was inspired by the Victorian era.

It was the second name of one of Queen Victoria’s granddaughters.

Eugenie was born sixth in line to the throne, but moved down to 10th following the arrival of the three Cambridge children and Archie Mountbatten-Windsor.

She became the first royal baby to have a public christening when in 1990 she was baptised during morning service at St Mary Magdalene Church, Sandringham.

Two years after she was born, Andrew and Sarah announced they were to separate.

The duchess, nicknamed Fergie in the press, was responsible for sparking a major scandal in 1992 when she was snapped topless having her toes kissed by her financial adviser John Bryan.

Andrew and Sarah divorced in 1996, amicably had joint custody of Eugenie and Beatrice, and have remained close.

When she was 12, Eugenie underwent a successful operation to straighten her spine, having been born with the rare condition of scoliosis.

She is now patron of the Royal National Orthopaedic Hospital, and her wedding dress was specifically designed with a low back to show her surgery scar.

Eugenie explained: “I believe scars tell a story about your past and your future and it’s a way of getting rid of a taboo.”

Her teenage years were relatively well-protected from the media and she was said to be caring, considerate and cheeky.

As an 18-year-old, she was reprimanded by her boarding school after she was reportedly caught running around naked.

It was reported that a senior staff member was woken by playful shrieks and found about a dozen young women dancing around without any clothes in the college grounds.

Eugenie took combined studies of English, history of art and politics at Newcastle University, lived in £96-a-week halls and then in a student house and graduated with a 2:1.

She is now is a director at the contemporary art gallery Hauser & Wirth in London, and is passionate about art, citing Jean-Michel Basquiat, the pioneering prodigy of the 1980s New York art scene, as a hero.

The princess posed for fashion magazine Harper’s Bazaar in 2018, and shared the secrets of a day in her life, revealing that she shops at Waitrose, does her make-up in the car, finds heels tricky to walk in and likes to watch zombie drama The Walking Dead.

She listed chips, Diet Coke and cashew nuts as her indulgences, and vodka with soda and lime as her favourite tipple.

Her romance with Stowe-educated Mr Brooksbank, European Brand Manager for Casamigos Tequila co-founded by George Clooney, began after they fell in love at first sight on a ski trip.

Eugenie is close to both her parents, calling them Mumsy and Papa, and saying: “They are the best divorced couple I know. They just always went out of their way to make us feel loved and secure.”

In her Instagram posts, she pokes fun at herself through family photos including one of her as a youngster “stifling a yawn on the steps of St Paul’s in a full pink suit”.

She is very close to her sister, whom she calls “Bea” or “Beabea”.

“Like all sisters we have silly arguments about unimportant stuff, but we do love each other to death,” she has said.

The princess is not a full-time working royal, but is a regular at Ascot and Trooping the Colour and also puts in appearances at royal garden parties and major celebrations and jubilees.

Eugenie is also patron of several charities including the Elephant Family, the Teenage Cancer Trust, the Coronet Theatre and the European School of Osteopathy.