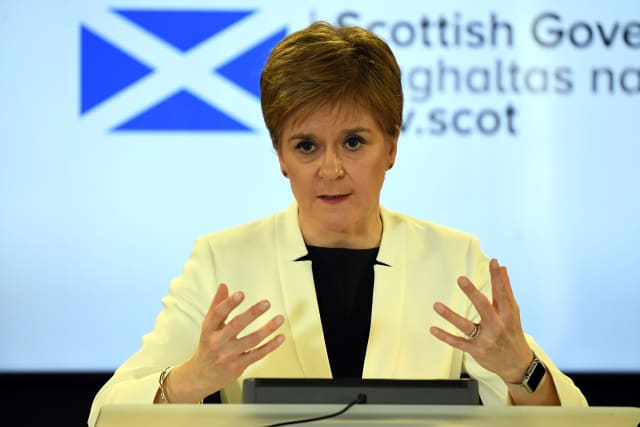 Nicola Sturgeon has announced new measures in the fight against coronavirus as the number of people dying with the disease in Scotland reached 10.

The First Minister declared Scotland’s islands a no-go zone for visitors, saying ferry companies have been told not to take “non-essential travellers”.

Meanwhile, senior pupils who had been planning to return to school despite closures to complete coursework for exams have also been told to stay away.

And 200,000 Scots who could be most seriously affected by Covid-19 – including cancer patients and those who have had organ transplants – are to be given medical guidance which could see them having to shut themselves off from other family members in their own homes.

They will have to “strictly isolate”, Ms Sturgeon said, and will be given a support package which could see them get help with getting food and other essential supplies.

The moves were announced as the First Minister said the army had to be called in to help get a coronavirus patient from one of the Scottish islands to the mainland for treatment.

It also came as Dr Catherine Calderwood, Scotland’s chief medical officer, revealed the rate at which the infection is being spread is higher than had been expected.

The latest figures show 416 people in Scotland have tested positive, an increase of 43 from Saturday. The number of deaths has risen from seven to 10.

Dr Calderwood said it had “become clear we were underestimating the doubling time of the virus, actually the number of cases was spreading more rapidly than the estimates which had come from China”.

One person could actually be spreading he virus to four to six people, she said.

Dr Calderwood added: “So that acceleration, that explosion of cases is likely to be accelerating more rapidly than we realised.”

She spoke after Ms Sturgeon said: “Today we have also had to call on military help to transport a patient from one of Scotland’s islands to the mainland for treatment.

“And this underlines the fact that no part of Scotland will not be affected by this virus.

“Unfortunately, no corner of Scotland is not at risk of seeing some of their residents die from it.”

She added: “However, if we all do the right thing now we will reduce that impact and save lives.

“If we don’t we face many more people than would otherwise be the case becoming ill and dying, and we risk our NHS being overwhelmed.

With cafes, bars, restaurants, cinemas and other such venues being told to close, Ms Sturgeon condemned the “tiny minority” of bars that stayed open on Saturday.

The First Minister said: “Let me be blunt – in doing so they put lives at risk.

“My message to them is close now. We will have emergency powers in days to force you to close and we will use these powers if we have to.”

She told people not go shopping “except for essentials like food and medicine” and that they should not gather for parties at people’s houses or attend wedding receptions and other celebrations.

While people can go outside, she stressed they should continue to follow guidance on social distancing.

With people “flocking to Scotland’s remote communities”, the First Minister said that was putting “extra pressure on essential services and on health services that are already more distant from people”.

She said: “As of now we have advised our ferry companies, who have already suspended bookings, to no longer take non-essential travellers.

“Those who do not normally live on the islands and who have travelled there in the last few days will be able to leave to reduce pressure, but from now on ferries will be for those who live on our islands, who have an essential need to travel to and from the mainland, and for essential supplies or business. Nothing else.”

She also told accommodation providers, such as hotels, B&Bs and holiday cottages: “You should not be accepting visitors.

“Provide accommodation for your staff and make yourselves available to help essential workers and support essential services, that is all.”

Uplifting news: Over The Rainbow recitals and vicars getting creative