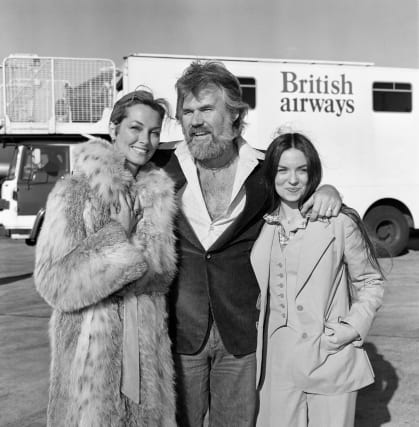 Kenny Rogers has been hailed as “an icon of country music” following his death aged 81.

The husky-voiced singer, known for hits such as Coward Of The County and The Gambler, died at home from natural causes, under hospice care and surrounded by his family.

Singer Richard Marx tweeted: “I’m so sad to see Kenny Rogers go. He did so much for me as a young songwriter and we stayed friends for over 30 years.

“I’ll really miss him. May he rest easy.”

He ended the video with the message: “Rest in peace, Kenny.”

She said: “Things I know about Kenny Rogers. When THE GAMBLER hit, he was already 50 years old. The songs most know came after. WE ARE THE WORLD was filmed at his studio. My sister Tera worked at Kenny Rogers Roasters as a teen. This is my jam. Rest well, sir.”

Rapper MC Hammer shared an image of Rogers and the words: “True all time Great. Impeccable delivery and warmth in his songs. ‘The Gambler’ R.I.P.”

A statement from the Golden Globe Awards, which nominated Rogers’ They Don’t Make Them Like They Used To in 1986, hailed him as “an icon of country music and a Golden Globe nominee”.

The Country Music Association said: “Country music has lost the great Kenny Rogers, who has forever left a mark on country music’s history. His family and friends are in our thoughts during this difficult time.”

The British Phonographic Industry, which organises the Brit Awards, said in a statement on Twitter: “A country music legend, our thoughts are with the friends and family of Kenny Rogers.”

Rogers, who also enjoyed success in partnership with Dolly Parton, announced a farewell tour in 2015 but continued performing until 2017.

The multiple Grammy winner, who played the legends slot at Glastonbury in 2013, had planned further performances but called off the shows in April 2018 due to unspecified “health challenges”.

He said in a statement at the time: “I’ve thoroughly enjoyed this opportunity to say farewell to the fans over the course of the past two years.

“I could never properly thank them for the encouragement and support they’ve given me throughout my career and the happiness I’ve experienced as a result of that.”

Born and raised in Houston, Rogers’s trademark gravelly voice helped bring him 20 solo single number ones on the US country charts between 1977-87 including his remake of Lionel Richie’s Lady.

In the UK he had two number ones – Lucille in 1977 and Coward Of The County in 1980. Other British top 10 entries included Ruby, Don’t Take Your Love To Town in 1969 and his Islands In The Stream duet with Parton, which reached number 7 in November 1983.

The Gambler was adopted as the team song by England at the Rugby World Cup in 2007, with Rogers telling the players in a video message: “I don’t know a whole lot about rugby but it’s a song that means a lot to me and I’m mighty proud that you guys found something in it to be your inspiration.”

Rogers’ family is planning a private service “out of concern for the national Covid-19 emergency”, a statement said. A public memorial will be held at a later date.