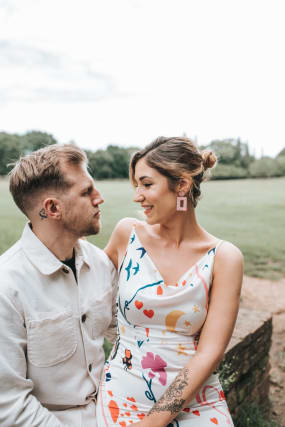 Couples across the UK have been left thousands of pounds out of pocket after the coronavirus pandemic forced them to cancel their weddings at short notice.

With mass gatherings discouraged and the Church of England limiting weddings to just five people — the bride, groom, priest and two witnesses — many couples have had to delay their wedding until the outbreak is over.

For Grace Francis, 28, and Ethan Lavers, 27, this is the second time they have been forced to delay their church wedding after a last-minute venue sale left them having to search for somewhere new to host it.

Miss Francis told the PA news agency: “The first time the venue decided to sell and they told us via email, and that was back in September. We got all repaired, all sorted.

“Now it’s two months away and coronavirus has hit so we’ve rescheduled it again — hopefully to August but we are saying to guests, it’s August if the situation’s better, we’re not going to put anyone’s health at risk to travel if it’s not better. We’ll move into 2021 if we have to.”

“We had everything booked, even the little bits in the evening and entertainment, so we’ve had to try and rebook everything.”

Although some vendors have been sympathetic, not all have been able to rebook for the new date. Miss Francis said she estimates the couple could be up to £4,000 out of pocket.

She said: “We’re also trying to buy a house and not sure if we should be going ahead with that.

“But we are trying to be grateful. There are so many people in worse situations, we’ve still got our jobs and our health — it’s very much a first world problem.”

They were offered the chance to have a smaller ceremony but Ms Francis said: “I couldn’t imagine picking only two people to see us get married.”

Bex Knight, 26, and fiance Ryan Gregory, 28, had been waiting three years to get married, and have now had to delay their wedding further, with a new date in October.

The couple, who were originally due to tie the knot on April 17, had planned a small wedding for 60 people.

Miss Knight said: “It’s been three years coming, we were both so beyond ready.”

She said the venue had been sympathetic and offered to rebook them, free of charge.

She said: “We had done everything and I’m quite an organised person anyway, so I had everything done about the two-year mark — dresses done, I’ve had all my alterations, invitations had gone out with all place names.

“My biggest worry is I spent a year trying to pick the perfect people for our wedding. And if they couldn’t make it, we didn’t know what we were going to do.

“It’s not their fault if they’ve got a wedding booked in October they weren’t expecting the whole country and the whole world closed down for a couple of months.”

“However, we still feel lucky. I really wanted to kick and scream but it’s not anyone’s fault.

“It’s easy to feel totally wiped out if you have to postpone or you have to cancel and I think rightly so.