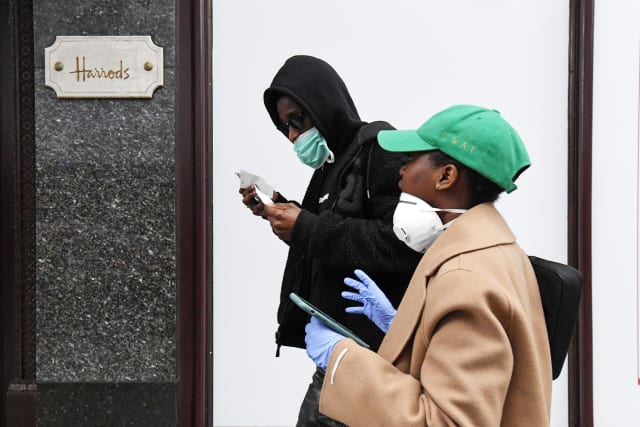 Here are the answers to some of Friday's key coronavirus questions, as it was announced that pubs, cafes and restaurants across the UK would shut.

– What is the current death toll in the UK?

A further 39 people in England were confirmed to have died after testing positive for Covid-19, bringing the UK death toll to 177.

– What venues will be closing?

The Government has told pubs, bars, cafes and restaurants to close from Friday, although Prime Minister Boris Johnson said venues can continue to provide a takeaway service.

Nightclubs, theatres, cinemas, gyms and leisure centres have also been told to close with the same timescale.

– Does that mean I can still go to the pub on Friday?

Mr Johnson acknowledged that people may be tempted to go out on Friday night, before the measures are introduced – but he said "please don't".

– When will these venues open again?

Communities Secretary Robert Jenrick said the measures shutting pubs and restaurants would be in place for 14 days "and then reviewed to consider their effectiveness".

– Can I still go shopping or will shops be closed?

Supermarkets and clothing shops will remain open. But some, like Harrods – which said it was shutting the store apart from its food halls and pharmacy on Friday – may choose to close anyway.

– What is the latest scientific advice?

Scientists advising the Government have warned that restrictions to control the spread of the virus will need to be in place for most of a year – at least.

The Scientific Pandemic Influenza Group on Modelling said that while the severity of measures could fluctuate, "stricter" measures would need to be enforced for at least half of the year.

– Can I still go outside if I'm social distancing?

Deputy chief medical officer Dr Jenny Harries said the official advice does not say avoid going outside, but if you choose to do so, do it in a way that reduces your social contact.

She suggested riding a bike two metres apart, and said not to participate in team games.

– What has the Government said about protecting jobs?

Chancellor Rishi Sunak said on Friday he was establishing a coronavirus job protection scheme to help employers hit by the outbreak.

He said that they would be able to apply to HM Revenue and Customs to cover 80% of the wages of staff they keep on, up to £2,500 a month.

– What if I still find myself out of work?

Mr Sunak said he was increasing the Universal Credit standard allowance for the next 12 months by £1,000 a year, and raising the working tax credit basic element by the same amount.

– Have they announced any provisions for renters?

Also at the briefing, Mr Sunak pledged £1 billion of support for renters by increasing housing benefit and Universal Credit.

He said the welfare payments' "generosity" would be increased to allow the local housing allowance to cover at least 30% of market rents.

– The entertainment industry has been hit hard – what is the latest?

The Society of London Theatre has said that all performances at West End theatres are cancelled until April 26.