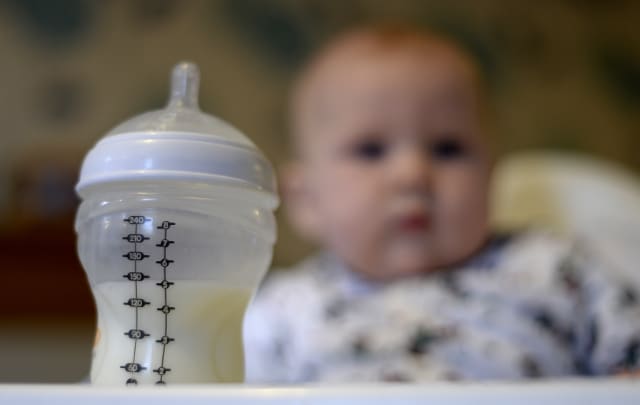 Formula milk is selling online for more than triple its usual price as parents report they are struggling to purchase it from shops.

Manufacturers reassured parents they are working hard to meet demand during the coronavirus outbreak, as sellers on eBay and Amazon flog products for inflated prices.

Supermarkets have been struggling to keep shelves full of a range of products amid increased demand, panic-buying and stockpiling.

The British Pregnancy Advisory Service (BPAS) said it was concerned that mothers struggling to access the appropriate formula milk may be forced to resort to unsafe feeding practices, such as diluting existing stock.

Director of external affairs Clare Murphy said: “It is incredibly concerning to hear that some parents are unable to find supplies in their usual supermarket, and that it is being sold at extortionate prices online.

“This is exploitation at a time of international crisis, and families will suffer as a result.”

Joanne Plater, 31, from Featherstone, unsuccessfully tried four shops in her local area before heading further afield for the formula she needs for her 10-month old daughter.

She said: “By this point I was really panicking because I needed that stuff to feed my child. They can’t go without it, so I don’t know what I would have done if I’d not been able to find it.

“It’s the same for nappies, they were sold out everywhere.

“We now have enough to last us around three weeks, but again I start worrying about having to do this all over again once we have run out.

“I think this stockpiling is absolutely ridiculous.”

Mumsnet founder Justine Roberts said: “Many (of our members) are saying they’re having to visit several shops before finding an available tub; others are relying on corner shops, chemists, Amazon or the manufacturers themselves, having found that supermarkets are having more trouble getting shelves re-stocked.”

Amazon said it had taken action against the sellers of the products the PA news agency flagged up.

Bosses at eBay said on Twitter that it had introduced measures to “prevent and remove listings that are priced unfairly”.

A spokeswoman said: “EBay does not tolerate sellers exploiting other users.

“We are monitoring the situation as it evolves, our international security teams have been working around the clock, and we continue to work closely with authorities including Trading Standards.”

An Amazon spokesman said: “There is no place for price gouging on Amazon.

“We are disappointed that bad actors are attempting to artificially raise prices on basic need products during a global health crisis and, in line with our long-standing policy, have recently blocked or removed tens of thousands of offers.

“We proactively remove offers that violate our policies.”

A spokeswoman at the British Retail Consortium said: “Retailers are working as hard as they can to restock as quickly as possible and get products onto their shelves.

“However, it’s really important people support each other and stop panic-buying so that everyone can access the products they need.”

Formula milk manufacturers who are members of the British Specialist Nutrition Association signed a joint letter reassuring parents they are working with production facilities, retailers and their supply chain teams to keep shelves stocked.

They wrote: “We ask everyone to be considerate in the way they shop and we will continue to work with retailers to ensure there is sufficient formula milk available for everyone that needs it.”