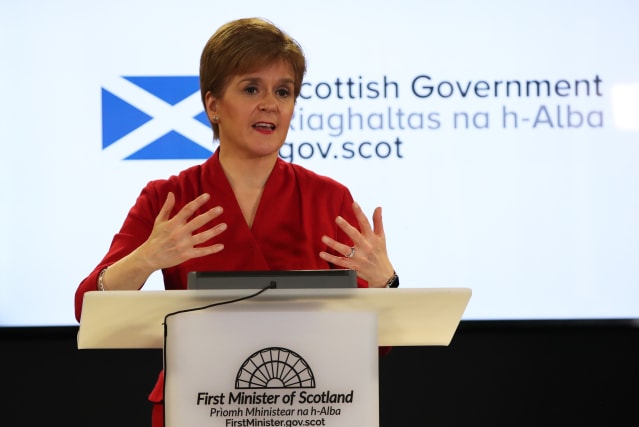 First Minister Nicola Sturgeon has called on businesses to support their staff during the outbreak of coronavirus.

Ms Sturgeon condemned the actions of Britannia Hotels after it sacked staff at the Coylumbridge Hotel in Aviemore, leaving some without accommodation.

At a briefing on the virus on Friday, Ms Sturgeon said: “I would unreservedly condemn the approach that was taken in the Aviemore case, that is not how we want employers to operate.

“I won’t underestimate and don’t want to downplay the difficulty that businesses and employers are in, but we’ve seen so many good examples, like Macdonald Hotels stepping in to offer accommodation to all effected by that.

“We want to be doing everything we can to support businesses, but in turn we need employers to support their workforce too.”

At the same briefing, Scottish Economy Secretary Fiona Hyslop said the virus will “bring out the best of us, but also the worst of us”, referring to some business practices.

She said the outbreak requires an “unprecedented economic response”, adding she hopes to hear positive news from Chancellor Rishi Sunak on worker protection when he makes a statement later.

Ms Hyslop said: “The prime issue now must be on people’s health. Employers must allow their staff to follow medical advice, to isolate themselves or indeed as part of their households, and workers should not be pressured in any way to breach that advice.

“We have to put the public health aspect first and foremost.”

Ms Sturgeon said there are now 322 confirmed cases of Covid-19 in Scotland, and there have been six deaths.

Ms Hyslop said there needs to be “some kind of system” to protect staff during what is expected to be a significant downturn in productivity.

She added: “That’s why we’re looking forward to hearing what the UK Government has to say this afternoon in relation to keeping people in employment with some kind of income support.

“If everybody – workers, business and government – work together, that’s part of that shared endeavour that will help us get through what is an unprecedented health crisis.”