Churches getting used to ‘entirely new way’ of worship 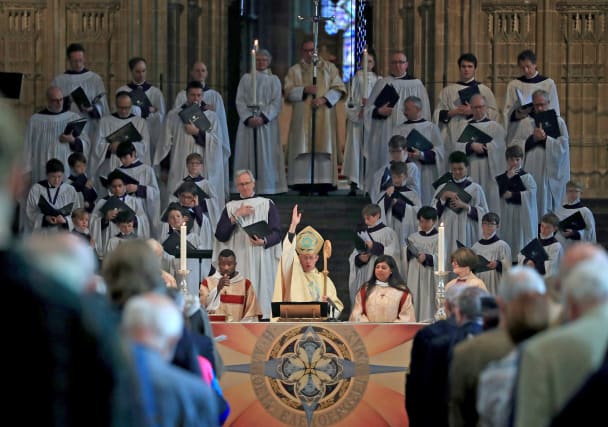 Churches across the country are preparing for their Sunday services to be delivered to mass audiences over the internet.

The Church of England and Church of Scotland have now both banned mass worship, and Catholic churches are taking a similar approach to encourage people to maintain social distance to slow the spread of Covid-19.

The Rev David Meakin said the church is having to work out “an entirely new way of doing things”.

He said: “The Second World War didn’t shut the churches, but this has, so we’re in day three of trying to work out what we’re going to do.”

Mr Meakin is part of a rural team of parishes near Aylesbury comprising 11 churches who will be broadcasting morning prayer and Eucharist services online from this Sunday.

He is unsure whether the streams will be used by all parishioners, however. He explained: “We will put stuff online, but I don’t know how much take-up there will be, because a proportion of our people are relatively old.

“They don’t go on to the internet, it’s not a place that they go.”

Nonetheless, he thinks it is important to maintain a church presence for as long as possible.

“Stick a laptop somewhere and you can broadcast on Facebook within seconds, it’s very straightforward, even if it won’t be high quality,” he said.

He added: “I think some will value it – frankly, even if a few access it, it’s still worth doing.”

The Archbishop of Canterbury Justin Welby will broadcast a service on BBC local radio this Sunday, and other denominations are making similar plans.

The Church of Scotland have a 40-strong list of churches who share their services online in some way, and catholic dioceses are also announcing their plans, with Shrewsbury Cathedral among those to confirm they will be broadcasting Mass.

In a letter to the congregation, Archbishop Malcolm McMahon said: “During these disturbing and threatening times, the rhythm of the prayer of the Church will continue.”

One London church has already begun online worship, and there have been enthusiastic audiences.

She told BBC Breakfast on Friday: “We’ve got over 1,000 people just for morning prayer and for our lunchtime services.

“We can’t even fit 1,000 people in our church, we’ve never had these sorts of numbers.”

She said a lot of those tuning in are not necessarily regular churchgoers, and added: “I think a lot of people are looking for sources of comfort and kindness at times like this.

“And the regularity of a real person live proclaiming words of hope and love every morning and every lunch time is something that a lot of people are joining in to.”