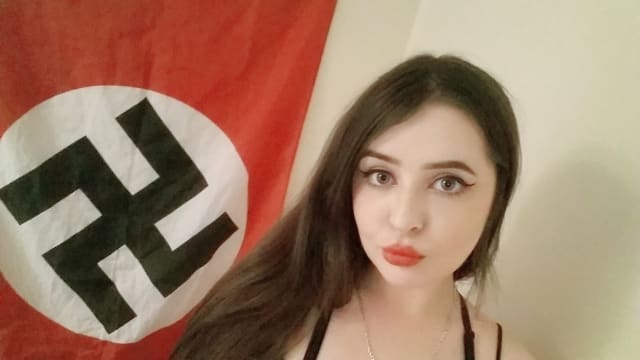 Two young lovers who bonded over a shared interest in the violent, racist ideology of the extreme-right have been convicted of being members of a neo-Nazi terrorist group.

Alice Cutter, 23, and 25-year-old Mark Jones were found guilty of being members of the proscribed group National Action after a retrial.

Birmingham Crown Court heard how on the day of the group’s ban, Cutter had poured out her heart to Jones as she worried over what their future may hold.

Amid the sweet nothings, the jurors were also shown hundreds of messages in chat groups and in texts, exchanged between the pair and with other group members, full of anti-Semitic remarks and racist epithets.

Cutter, a waitress also had a picture of Holocaust victim Anne Frank on her phone with the caption: “What’s that smell – oh it’s my family burning.”

He had photographs on his phone of material resembling ash in clear plastic bags, with signs reading “dead Jew child”.

Both posed for photographs next to a Nazi-saluting snowman.

They joked about using lethal chlorine gas on Jews, with Cutter texting Jones: “Oh my god, f**k f**k, this could be done to synagogues.”

Cutter also entered the group’s Miss Hitler competition, under the name Miss Buchenwald, referencing the Nazi-era death camp where thousands of Jews went to their deaths.

Jones, the group’s propaganda and graphics guru and one-time law student who fancied himself a legal mind, also ordered several knives on the internet and posed with the blades for photos, some of which were taken by Cutter.

Both claimed they were for the couple’s camping trips.

Following the ban, Jones joined another far-right group – NS131 – and appeared daubing the organisation’s logo on a wall in a promotional video in Swindon.

That group was also later banned along with another, Scottish Dawn, which Jones also did the graphics for.

On September 27, 2017, weeks after several other National Action members had been arrested, Jones’s and Cutter’s home in Sowerby Bridge, Halifax, West Yorkshire was raided.

In December, Jones, then under investigation, travelled to Ukraine where he met members of the country’s right-wing militia group Azov Battalion.

He had also been messaging a member of Lithuanian nationalist organisation Skydas.

It was in the country’s capital Vilnius that Cutter claimed she bought Swastika earrings she was pictured wearing – though she claimed they were “pagan”.

Jones’s background was as a former member of the British National Party youth wing, before his head was turned by National Action as the BNP became riven with internal divisions.

Evidence was shown to the jury revealing how in October 2014, the BNP’s then recently deposed leader Nick Griffin asked Jones about using his design skills to mimic al-Qaida’s online publication Inspire, adding a nationalist version was “clearly needed”.

Shortly after National Action’s ban, Cutter sent Jones a message which said: “I really worry about what the future has in store for people like us, talking about it yesterday made me feel weird but we have to try obviously.

“Can’t think of anybody better to attempt to carve out an existence with even if the West is utterly f**ked. X.”

Jones replied: “Ride the tiger, brah. Don’t over think it as their whole world view is self-defeating in the end. We’ll do well through it all.”

Cutter said: “I understand, it’s just I’m really not keen on becoming a martyr and leaving kids behind or having them suffer too.

“But they will suffer anyway if we don’t do this and I see being childless as a non-option. It’s just hard to swallow isn’t it?”

But it was not all plain-sailing for the couple – who have since split – as it emerged in the trial that Jones had cheated on his girlfriend with a potential female teenage recruit, weeks after the ban came into force.

The 16-year-old female college student, from Kent, emailed the group’s website link nine days after the December 2016 ban, in which she railed against “lefty wankers” who were “brainwashed by shitty leftist propaganda”.

Barnaby Jameson QC, prosecuting, asked Jones about the tryst, and whether he had “groomed” the teenager, after their first face-to-face meeting on January 22, 2017.

Jones, a joiner, denied “grooming”, describing their encounters before the affair ended in May 2017 as a “romantic liaison” in hotels and nothing more.

As Jones confessed to his infidelity, Cutter, sitting a few feet away in the court dock, cried.

In her evidence, Cutter told jurors she had removed the engagement ring Jones had given her when he proposed at Fountains Abbey, Ripon, North Yorkshire, over the infidelity.

Unknown to the jury, Cutter – who styled herself to other members as a “fashy (fascist) princess” – also gained at least one other romantic admirer of her own during the first trial, in 2019.

The judge was told a mystery admirer had sent a love letter via the court, though the contents were not disclosed.