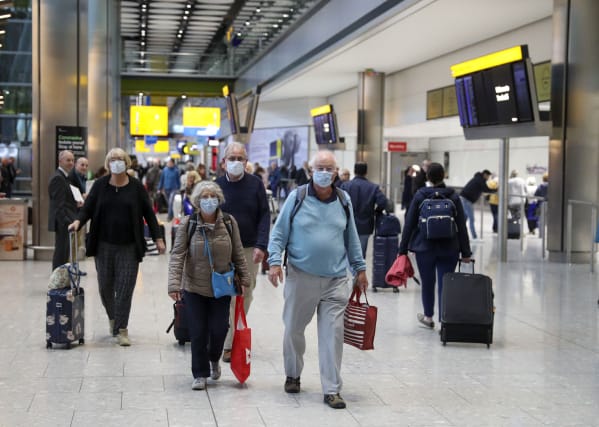 British passengers on board a coronavirus-hit cruise ship have praised the efforts of crew members after landing back in the UK.

The Braemar, which had 667 Britons on board, saw 28 passengers and 27 crew members isolated due to influenza-like symptoms – six of whom tested positive for Covid-19.

Four flights were arranged to transfer the passengers back to Britain from Havana in Cuba, and three of them – containing unaffected passengers – landed at London Heathrow on Thursday morning.

A fourth flight, carrying those who had tested positive for Covid-19 or had flu-like symptoms, is scheduled to land at MoD Boscombe Down in Wiltshire on Thursday.

Fred Olsen Cruise Lines, the operator of the Braemar, said one guest and four crew members received a positive diagnosis for Covid-19 and one further guest, who provided an inconclusive result, was later confirmed to be positive.

The Braemar docked in Havana in the early hours of Wednesday.

After arriving back at Heathrow on Thursday, Braemar passenger Phillip Allison told the PA news agency: “Everybody has been absolutely excellent. The cruise company, British Airways – first class. They got us here with no problems. We’re not even in isolation.

“So we’ve all been quite well for some while – but you wouldn’t think so when we got into the port (Havana) to get on the plane.

“There were police keeping us and guarding us – and we weren’t even allowed out of the coach so we could get straight on the plane.

“Otherwise, it’s been a dream really. Off the boat, into a coach, on the plane, here.

“So we’re just going to catch a National Express and go home.”

Fred Olsen Cruise Lines managing director Peter Deer said: “I would like to thank all of our guests for their patience as we worked around the clock to get them back to the UK.

“We know that at times this was a frustrating process, and it was not the way they, or we, had anticipated the end to their holiday.

“Once again I would like to extend my thanks, on behalf of us all on Fred Olsen Cruise Lines, for those who have worked so hard to get our guests home, including the Foreign and Commonwealth Office, the Cuban authorities and the Port of Mariel, the Department for Transport, the Ministry of Defence and the Department of Health and Social Care.”