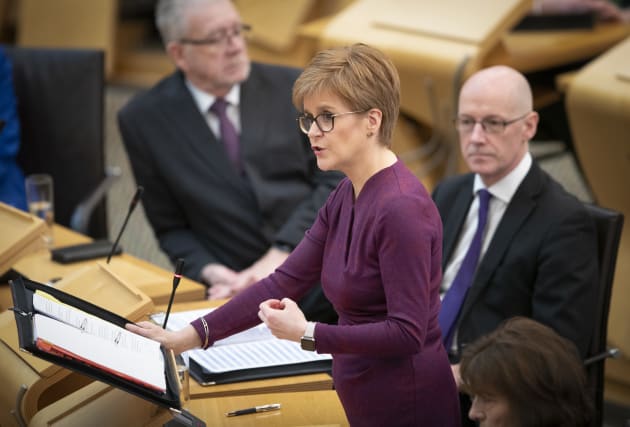 Nicola Sturgeon has said she needs the help of every person in Scotland as the country tries to deal with the coronavirus outbreak.

The First Minister said the pandemic has left her “acutely aware” of the “inability of Government alone to deal with this challenge”.

Earlier, she confirmed the Covid-19 death toll in Scotland has risen from three to six.

A total of 266 people are now confirmed as having the infection in the country.

Describing the outbreak as being “incredibly difficult and challenging” to deal with, she called for a “national endeavour” to get through the weeks and months ahead.

The First Minister pledged her Government would be “as open and transparent” with the public as possible.

She said: “I don’t want to scare people because, in my experience, if you scare people it’s not very productive.

“But I do want people to understand this is not a drill. This is real. This is happening. We all have to take seriously our responsibility to follow the advice.”

She added: “I have never been as acutely aware as I am right now of the inability of Government alone to deal with this challenge.

“I, as First Minister, will do my best to lead this operation in the months ahead but I need the help of everybody across Scotland.

“So what I can do is share as much information as possible but sometimes that will involve being frank where I don’t know the answer to something immediately or have to be honest that certain things take some time to be put in place.

“This has to be a collective national endeavour. It will not be easy but if we do that, all of us pulling together – Government, the public, all parts of the economy and the public sector – then I do have confidence, not withstanding how incredibly difficult and challenging this situation is, that the country will be able to get through it.”

She made the plea as she answered questions from opposition leaders about the Scottish Government’s response to Covid-19.

The weekly First Minister’s Questions session at Holyrood was dominated by the issue, with Ms Sturgeon telling the Scottish Conservative leader Jackson Carlaw work is under way to almost quadruple the testing capacity for coronavirus in Scotland.

At the moment, three labs in Edinburgh, Glasgow and Dundee can carry out in total about 780 tests a day for the infection, with Ms Sturgeon saying work is under way to increase that to 3,000.

She said: “Broadly speaking, there are three objectives we are seeking to meet with testing right now.

“Firstly, to protect those who are most vulnerable and save lives, that is why those who are admitted to hospital with Covid-19 symptoms, or with upper respiratory infections, will be tested.

“Secondly, allowing critical workers to be at work unless they are actually ill, and there is work ongoing in all four nations to define that list of critical workers – but of course it includes those at the front-line of our NHS and social care services.

“And thirdly, the objective of surveillance, to make sure we are able to monitor the prevalence of the infection across the population.”

She also told him the Scottish Government will continue to fund nurseries – even though they will be closing as part of the response to the coronavirus.

Mr Leonard said there had been deliveries of out of date equipment made to crews on Wednesday, an issue raised by Labour Anas Sarwar in the chamber earlier in the week.

The First Minister said it was not for her to decide what equipment is made available to ambulance workers, adding: “There are pressures on those supplies, not just in Scotland but globally right now, but we must do all that we can to support those on the front-line.

“We always owe our front-line health and social care workforce an enormous debt of gratitude but I can say candidly that we will never, ever owe them more than in the weeks and months to come.”