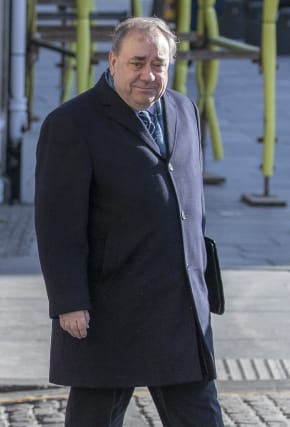 Alex Salmond’s former adviser has told a jury he checked on the “welfare” of a woman who was left alone with the former first minister of Scotland.

Salmond, 65, faces allegations of 13 alleged sexual offences against nine women, all of which he denies.

He has previously said a civil servant in the Scottish Government, known as Woman B, had “misremembered” an incident in which he is accused of grabbing her and trying to kiss her following a meeting at the first minister’s official residence, Bute House in Edinburgh, in 2010.

She earlier told the jury trying to shake him off was like “wrestling with an octopus” after he allegedly tried to recreate the pose on a Christmas card, featuring an image of a man and woman about to kiss.

Salmond’s former special adviser, Alexander Bell, 54, told the High Court in Edinburgh on the ninth day of the trial on Thursday that he had seen “nothing unusual” when he entered the room after the alleged assault.

“There may have been some joking related to the card but I don’t recall being told something she was unhappy about,” he said.

Alex Prentice QC, for the Crown, said: “The first minister and (the complainer) were alone in the drawing room, you having left and gone downstairs.

“Did you consider it necessary to return to the room? What was your intention in returning to the room?”

Journalist Mr Bell said: “To ensure that the welfare of my colleague was OK.”

Judge Lady Dorrian told the jury they have now heard all of the evidence in the case with speeches to follow.