Coronavirus: Huge queues at supermarkets despite Government assurances over food 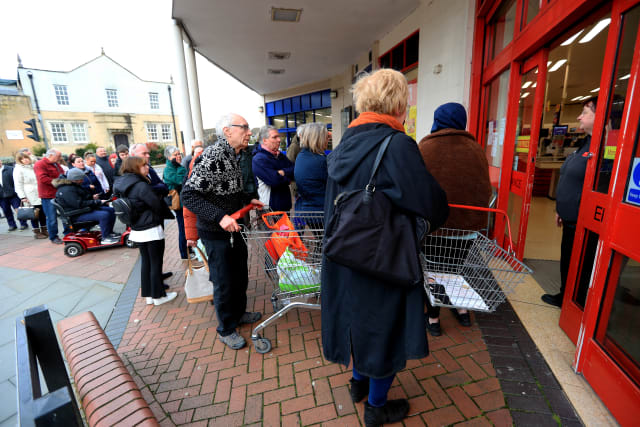 An influx of stockpiling shoppers caused massive queues at supermarkets around the UK, despite the Government insisting that there would be no shortage of food and supplies during the coronavirus outbreak.

Lines of customers could be seen at branches of several major retailers in London, where residents could face tougher measures due to the capital’s higher number of Covid-19 cases.

However, images posted on social media showed queues and empty shelves in other parts of the country including Manchester, York and Lowestoft.

One supermarket in Guildford, Surrey, had to open early on Thursday because of huge queues of shoppers, with one man banging his trolley against the door.

Some people were also ignoring pleas to allow senior citizens to shop in the first hour of opening.

The shopworkers’ union Usdaw has appealed to people not to intimidate staff at supermarkets and other stores during the current crisis.

It came after supermarket Ocado was forced to temporarily shut down its website due to “unprecedented strain” as orders streamed in from new and old customers.

Panicked shoppers spent an extra £57.3 million on items for “stockpiling” including medicines, handwash and canned food in the first week of March compared to the previous week as pandemic panic set in, reported The Grocer citing data from Nielsen Scantrack.

Amid the rush, Environment Secretary George Eustace told the Commons there was “significant resilience in our food supply chain” and no shortage of food.

“There isn’t a shortage of food, the challenge that we’ve had is getting food to shelves in time when people have been purchasing more.”

Supermarkets have announced measures to restrict purchases and ensure the availability of goods for the elderly and vulnerable customers.

Sainsbury’s said it would only allow customers to buy a maximum of three of any single item, while Morrisons said it is limiting purchases across 1,250 lines.

Asda also announced it is restricting shoppers to three items on all food and closing its cafes and pizza counters, while temporarily reducing the opening hours of all its 24-hour stores for re-stocking.

Aldi has already introduced limits of four items per shopper across all products.

The Government has also introduced a host of other measures including new delivery curfews so that lorries can run around the clock, relaxing regulations on delivery hours.

Mr Eustace added: “We are in discussions with other Government colleagues in MHCLG (Ministry of Housing, Communities and Local Government) around other support that we would deliver locally to get food to those who are self-isolating.”