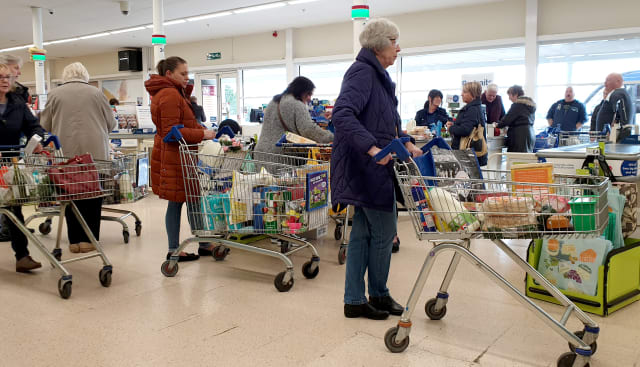 A Scottish Government minister has hit out at “selfish” shoppers who are panic buying vital products during the coronavirus outbreak.

Michael Matheson said the actions of those who were buying more than they needed are impacting on more vulnerable customers.

He spoke out on the issue as First Minister Nicola Sturgeon urged the public to “be responsible” and remember “we’re all in this together”.

While some supermarkets currently have empty shelves in areas, with shortages of items such as toilet toll, handwash and dried pasta, Mr Matheson said there are “enough supplies within the chain”.

He said: “The issue is with people overbuying, and the selfish nature of that is having an impact on some of the most vulnerable members of our community.”

Mr Matheson told Holyrood’s Rural Economy and Connectivity Committee he “very much welcomed” moves by some retailers to introduce dedicated times for elderly and disabled shoppers at the start of the day.

He added: “If people would buy the goods which they require at that particular point, it would ensure that everyone has access to the foodstuffs and household goods they require.”

The Transport Secretary called on all MSPs to “continue to impress that message within their own communities, to encourage people to act responsibly”.

Meanwhile, Ms Sturgeon said supermarkets had a role to play “in making sure they don’t allow stockpiling and panic-buying to happen”.

But she also urged the general public to “do the right thing” and avoid panic buying.

The First Minister said: “My advice to the general public is to be responsible. I know it sounds a bit cliched to say this,but we’re all in this together, we’re all going to be going through a tough time in the weeks ahead.

“Life is changing, life as we know it will be fundamentally different in the weeks to come and we’ll all be keeping a bit further apart from each other physically but that doesn’t mean those human connections and the responsibility we have to each other as human beings ends, in fact it becomes more important.

“Maybe out of this adversity, that’s what we’ll be reminded of – our obligations to each other.

“That’s my advice to the public – do the right thing for yourself, for your own loved ones, for your community.”