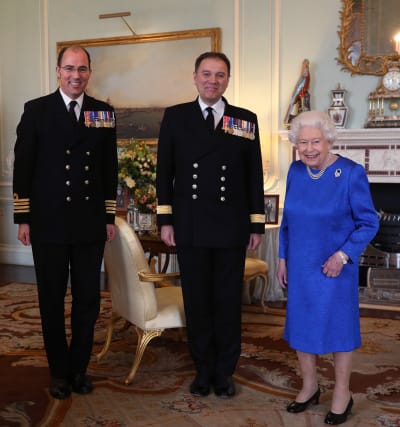 The Queen has held an audience at Buckingham Palace as she prepares to head to Windsor Castle amid the coronavirus outbreak.

The 93-year-old head of state greeted Captain Angus Essenhigh, who is the new commanding officer of the Royal Navy warship HMS Queen Elizabeth, and his predecessor Commodore Steven Moorhouse.

There were no handshakes, just bows from the captain and the commodore, as they met and chatted with the monarch in the private audience room of the Queen’s London home.

The Queen, dressed in a bright royal blue dress, smiled broadly as she spoke to the pair, who were in military uniform complete with medals.

They also took their seats in separate places around the fireplace during the meeting.

On Thursday, the Queen will decamp to her Berkshire royal residence as she socially distances herself during the coronavirus pandemic.

The monarch will be based at her favourite home with a reduced number of staff and will be following appropriate advice.

Audiences are brief, one-on-one meetings which happen regularly throughout her working week.

She often receives members of the diplomatic community, as well as political, religious and military leaders, and people who have won prestigious cultural prizes.

Buckingham Palace said on Tuesday the head of state would be continuing with her audiences this week, but future ones would be reviewed on an ongoing basis.

She usually has an audience each Wednesday with Prime Minister Boris Johnson, and is still scheduled to do so.

Mr Johnson has called on all people in the UK, particularly the over-70s, to avoid all non-essential contact and travel as part of unprecedented peacetime measures aimed at controlling the spread of Covid-19.

Elizabeth II, the nation’s longest reigning monarch, is due to celebrate her 94th birthday next month, and the risk of more severe symptoms from the coronavirus is greater for the elderly and those with pre-existing health conditions.

The HMS Queen Elizabeth warship was launched in 2014, but not officially completed until 2017, and is expected to become operational next year.

The £3 billion, 65,000-tonne aircraft carrier is the largest and most powerful vessel ever constructed for the Royal Navy.

The flight deck spans four acres, the ship is capable of carrying 40 aircraft and it boasts state-of-the-art weaponry and communications systems, as well as five gyms, a chapel and a medical centre.