Pub and restaurant business ‘getting worse by the day’ 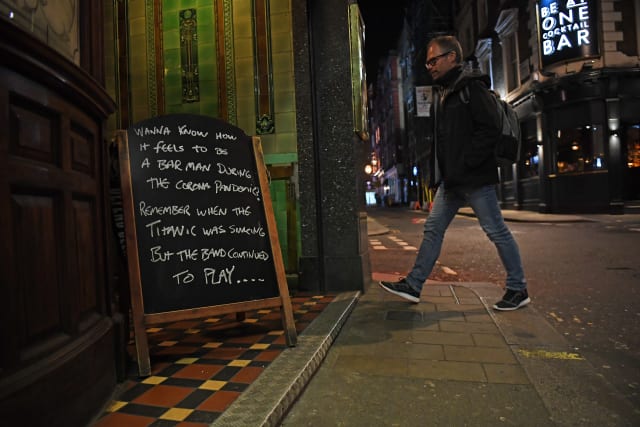 One of Britain’s biggest pub and restaurant owners has warned that sales are “getting worse by the day” as several of its peers said they were taking a serious hit from coronavirus.

The Restaurant Group (TRG), which owns Wagamama and Frankie & Benny’s, said that like-for-like sales fell 12.5% in the last two weeks.

It came alongside warnings from Marston’s, which runs 1,400 pubs across the country, and Mitchells & Butlers, the owner of Toby Carvery and All Bar One.

TRG said in a statement to investors: “In particular, our concessions business has been significantly impacted with like-for-like sales down 21.7% and getting worse by the day given international travel bans.”

It now expects like-for-like sales to drop by 45% in the first half of 2020 and is building a 68% sales drop and a 10-week shutdown into its forecasts for the leisure, pubs and Wagamama business.

Marston’s warned that while it was not yet feeling the brunt of the coronavirus outbreak, Government advice to avoid eating or drinking out was bound to “significantly lower sales in the coming weeks”.

Shareholders are now likely to miss out on the interim dividend, which was due to be recommended in May, which will save Marston’s £20 million.

Mitchells & Butlers said that “recent trading has been severely impacted” by the outbreak.

It also warned that Government advice to stay away from public eateries “is now expected to lead to a further significant downturn in sales”.

However, the pubs and restaurants groups welcomed Chancellor Rishi Sunak’s proposals on Tuesday afternoon to slash business rates and give loans to firms that need firming up.

Marston’s said they represented “good progress towards the very significant commitment which the hospitality sector requires from the Government”.

Mitchells & Butlers said it was “encouraged”, and The Restaurant Group has already built the rates relief into its forecasts for the next year.