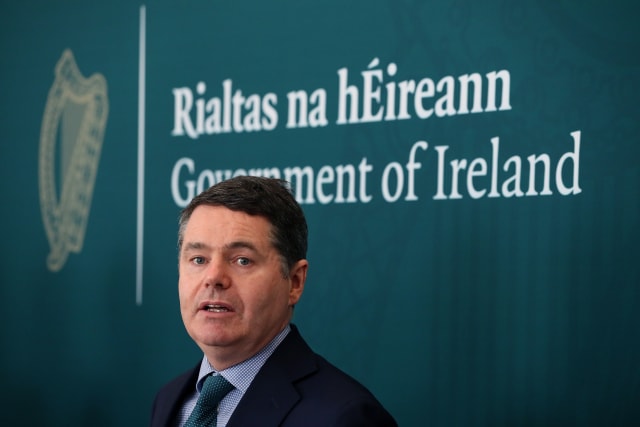 The Republic of Ireland faces significant job losses and an economic shock due to the Covid-19 pandemic, the Finance Minister has said, as he introduced a suite of measures to help bank customers.

Paschal Donohoe was speaking as Irish banks agreed on Wednesday to introduce a payment break of up to three months for customers who cannot pay their mortgage.

The payments were announced following a meeting of the Republic’s five main banks, and their representative group the Banking and Payments Federation Ireland.

AIB, Bank of Ireland, KBC, Permanent tsb and Ulster Bank, said they would work together to ensure that continuity of service plans are in place for customers.

The measures include a deferred collection on stamp duty on credit cards until July. Banks will also defer court proceedings for three months.

Speaking at a press briefing in Dublin on Wednesday, Mr Donohoe said the Republic of Ireland is at the centre of a “very significant economic shock”.

Up to 140,000 people have lost their jobs and more job losses are expected, with confirmed cases of Covid-19 expected to rise to 15,000 by the end of the month.

Mr Donohoe said: “I would not at this point in time like to talk about many hundreds of thousands of jobs being lost, until we get accurate estimates from the Live Register.

“At this point I don’t have an accurate estimate to share with the public regarding what the Live Register will be.

“For now all of my efforts are concentrated on mitigating the effects of job losses and developing plans to get people off the Live Register as soon as possible.”

While refusing to to be drawn on the number of job losses anticipated, he said: “I can at this point confirm that we are facing into a period of significant job losses, they are already being felt across the country.

“It is the case that those who were at work and had every expectation of continuing to be in work for many months and years to come, now find themselves in a situation in which they are not at work and worried about how they are going to pay their mortgage or rent.

“I want to assure people who have lost their jobs that all that can be done to get income to them quickly and get them access to the pandemic benefit can be done.

“We were on track to deliver a significant surplus in 2020. We will not be in a surplus position this year. We will very likely move into a situation where we have a deficit.”

Mr Donohoe said if any landlord avails themselves of the flexibility being afforded by the banks, they should not use it to evict tenants.

“Landlords with buy-to let mortgages cannot and should not evict tenants.”

When asked if the Government can stop landlords evicting tenants, he said: “There are legal constraints in place in relation to the ability of any government to intervene in the contract between landlord and tenant.”

Mr Donohoe also confirmed the limit for contactless payments is to be increased to 50 euro from 30 euro, in a bid to encourage the public to stop using cash.

Earlier on Wednesday, the Health Minister moved to reassure older people that the Government will look after them, as the number of cases of Covid-19 is expected to rise to 15,000 by the end of the month.

Speaking in Dublin on Wednesday, Simon Harris said: “We expect anywhere between 10-15,000 tests for Covid-19 being ordered in the coming days.

“It is going to take several days for your test to be processed. Some countries have decided to go against WHO guidelines and have stopped testing in the community – we will test, test, test.

“I really don’t want anybody in our country to be scared because we have to look after the health of all our people.

“Older people should not be worried – it is an uncertain time, but we are going to mind you.”