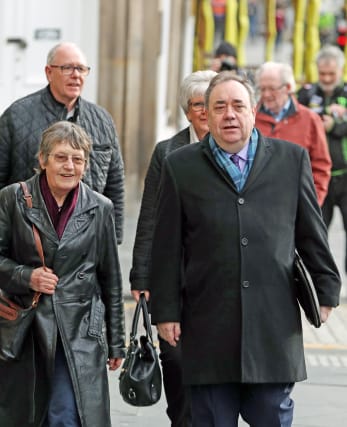 A businesswoman has told jurors she does not recall seeing a complainer, who has accused Alex Salmond of trying to rape her, “at any point” on the evening the alleged assault is said to have taken place.

The former Scottish Government official, known as Woman H, told the High Court in Edinburgh the incident took place at Bute House in Edinburgh following a dinner in June 2014.

Salmond denies the alleged incident at the first minister’s official residence happened, saying the woman was not there on the night in question.

He has said he had a “consensual sexual liaison” with Woman H the previous year.

The former first minister of Scotland, 65, is accused of a total of 13 alleged sexual offences against nine women, all of which he denies.

The defence witness, a company director who was speaking at the High Court in Edinburgh on Wednesday, said she was at the dinner with Salmond and another guest.

When Alex Prentice QC, prosecution lawyer, suggested the complainer had been at the dinner, the witness replied: “I understand the police put that to me and I absolutely have no recollection of seeing (her) on that night.”

It was also heard the complainer said it “would be great” to work with Salmond again – a year after she alleges he attempted to rape her.

Part of one message sent by the complainer in June 2015 – a year after the attempted rape – read: “Would be great to be working with him again.”

The court also heard from Salmond’s former principal private secretary, who described working with him as a “privilege and a penance”.

“I have described my time working with him as a privilege and a penance,” she said.

“It was very exacting, very fast-paced, also very tough, you needed to be quite resilient.”

She added: “He could be very demanding, he would expect people to be on their mark, on top of their game.

“He could be quite fierce if things weren’t as they should be.”

Meanwhile, Salmond’s former chief of staff told the court he spoke with Woman A, who claims the accused sexually assaulted her, but she did not indicate she would be involved in proceedings against him.