Emergency coronavirus legislation to be published ahead of school closures 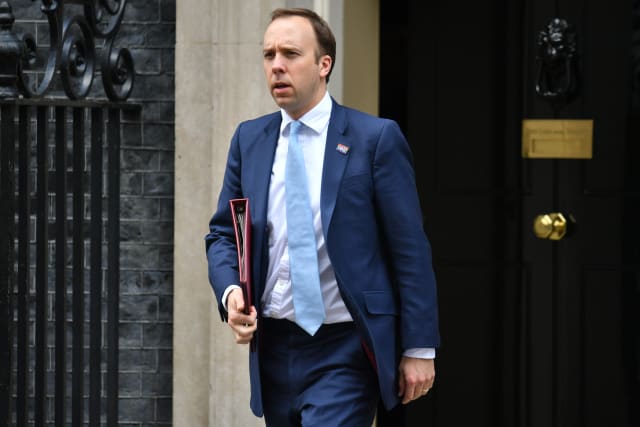 Emergency legislation to tackle the coronavirus outbreak will be published in Parliament after Prime Minister Boris Johnson announced the closure of schools and cancellation of exams.

Health Secretary Matt Hancock will table the Emergency Coronavirus Bill setting out measures aimed at slowing the spread and supporting the NHS and workers in the Commons on Thursday.

The legislation will be presented as the Army prepares to help out in the crisis and Londoners faced the prospect of greater restrictions, with the capital suffering a faster spread of Covid-19.

So far, 104 people have died after testing positive for coronavirus in the UK and tens of thousands of people are thought to be infected.

Schools across the UK were preparing to close to all pupils except those of key workers in a bid to halt the disease’s spread.

English schools will shut their gates on Friday until further notice, as will nurseries, colleges and childminders.

GCSEs and A-levels in both England and Wales will be cancelled – although the Prime Minister said there are plans for students to receive qualifications.

In Scotland and Wales, all schools will close for an early Easter break by Friday. A decision on whether exams will sit in Scotland has not yet been taken.

Schools in Northern Ireland will shut and it is expected pupils will not sit summer exams.

Mr Johnson said measures taken so far were helping to slow the spread of the disease, but he did not rule out tougher measures being enforced down the line.

The PM also did not rule out stricter controls being imposed on London ahead of the rest of the nation, with fears of a lockdown being imposed like in other nations.

Transport for London (TfL) announced up to 40 Tube stations would be closed on Thursday and a reduced service would run on the rails from Friday.

London Mayor Sadiq Khan warned Londoners they should not be travelling unless they “really, really have to”, but insisted the network must remain open to aid frontline health workers.

Meanwhile, the number of troops in a heightened state of readiness will be doubled to 20,000 while Reserves were to be placed on standby to support public services in a new “Covid support force”.

The Ministry of Defence was also planning to put 150 military personnel into training to drive oxygen tankers around the country to support the NHS.

Mr Hancock’s emergency legislation will also include plans to hand police powers to arrest and isolate people to protect public health but will be time-limited for two years.

Labour is not expected to force a vote on the legislation, allowing it to pass through Parliament swiftly with some MPs in self-isolation and concerns about others gathering in the House.

But leader Jeremy Corbyn wrote a list of conditions to the PM which he said would need to be considered to gain public support.

Mr Corbyn said the legislation must be renewed by a fresh vote in Parliament every six months in order to prevent too much power being handed to the Government.

He also said rent suspension must be introduced, called for the ban on evictions to last six months and for jobs and incomes to receive greater protection.

Some hospitals have begun stopping all non-essential visits to patients, while the FTSE 100 continued its downward slump as the financial impact of the crisis failed to cease.

However, there was a glimmer of hope in a day of bleak developments when the PM hailed a “game-changer” test was “coming down the track.”

It would test for antibodies to the virus and be able to tell if someone has been infected and recovered, allowing them to return to work.