Dennis Hutchings – Politicians have let me down 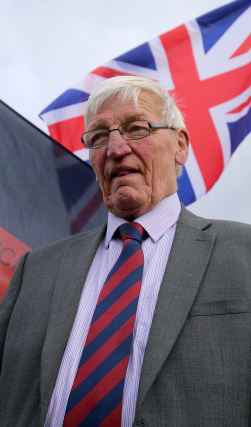 A former soldier facing prosecution over a fatal shooting during the Northern Ireland Troubles claimed politics has let him down.

Dennis Hutchings, 79, is due to stand trial in connection with the death of a man in Co Tyrone in 1974.

He said Government legislation meant those who served in Northern Ireland during the Troubles will not receive the same protection as those overseas.

He said: “Politics has let us down as it normally does.

“We’ve waited years for legislation to be passed to protect Northern Ireland veterans and it still hasn’t happened.

“Our only option now is to let the court decide.”

The Government’s chief legal adviser will have to consent to prosecuting Army veterans for alleged historical offences during overseas operations not including Northern Ireland, ministers have said.

Five years after the incident, it will be “exceptional” for a prosecutor to order a prosecution, the Ministry of Defence said.

A unit in Northern Ireland is to consider whether to prosecute for alleged wrongdoing.

Only Northern Ireland conflict killings with “compelling” new evidence and a realistic prospect of prosecution will receive a full police investigation, the Government said.

Hutchings confirmed a legal challenge would go ahead for allowing continuing “discrimination” against veterans by the Northern Ireland criminal justice system.

The former Life Guards Regiment member from Cawsand in Cornwall has pleaded not guilty to the attempted murder of John Pat Cunningham in Co Tyrone in 1974.

Hutchings, who is on dialysis twice a week for renal failure, is facing charges of attempted murder and attempted grievous bodily harm with intent.

British ministers are trying to strike a balance between the demands of many victims in Northern Ireland for justice, and new information, and pressure from Army veterans and Parliament to prevent what they term unwarranted prosecutions of alleged security forces’ wrongdoing.

Hutchings’ lawyer Matthew Jury said: “On one hand, the government has explicitly stated and acknowledged that veterans are receiving unfair treatment in Northern Ireland.

“On the other, its lawyers are denying its even happening. This is obviously absurd.

“Johnny Mercer (a Defence minister) should rightly be praised for what he’s achieved for veterans who served overseas but the fear is that the Westminster ‘blob’ will thwart his efforts to include those who served during the Troubles.

“It’s time for the courts to adjudicate on what is clearly a violation of veterans’ human right to fair treatment.”