Commons benches quiet for PMQs as MPs advised to stay away 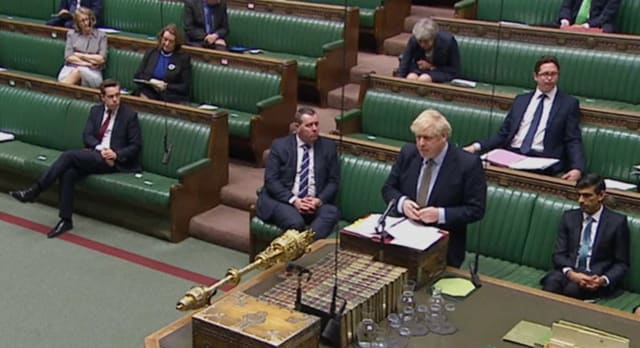 Sir Lindsay Hoyle said the precautionary move came following discussions between the political parties to limit the number of people crowded together.

Some 100 MPs appeared to be on the green benches, but with huge gaps in between many at a time which is normally the busiest 30 minutes of the chamber’s weekly schedule.

Whips from the Conservatives and Labour encouraged MPs to stay away if they were not listed on the order paper to ask a question, although Tory former prime minister Theresa May was among those who attended – and later asked her own question after being selected by the Speaker.

The social distancing measures, taken following similar advice to the public, created an unusually reserved atmosphere in the chamber for PMQs.

Opening the session, Sir Lindsay said: “Those watching our proceedings will have noticed that our attendance today is significantly below the normal numbers.

“I have discussed with the usual channels ways in which we can limit the numbers of people crowded together to ensure maximum safety.

“We are all doing our best to keep Parliament sitting and to follow Public Health England and guidance.”

Labour leader Jeremy Corbyn thanked MPs for their “responsible approach” in sitting a “suitable distance apart to avoid cross-fertilisation of this horrible disease”.

The exchanges between Mr Corbyn and Prime Minister Boris Johnson were focused on coronavirus, including statutory sick pay for workers and help for private renters.

Mrs May also asked: “(Mr Johnson) is rightly engrossed day to day in dealing with the developments of Covid-19, but I’d like to ask him to cast his mind a little further forward.

“I believe he’s also suggested that until that vaccine is available it may be difficult to ease restrictions successfully.

“Do you agree with that analysis and also what does a sensible exit strategy look like?”

Mr Johnson replied: “The objective of the Government and the objective of our scientific advisers is to depress the peak of the epidemic, to make sure that we get through it so that we can come out on the other side, and that we do that as fast as possible.

“I’m not going to give a timescale on it, but that is the strategy and I’m absolutely certain that it will succeed.”

Alliance MP Stephen Farry (North Down) asked about an extension to the Brexit process.

He said: “Defeating the coronavirus must be the top, indeed the only, priority for the foreseeable future.

“So regardless of Leave or Remain, how quickly will the Prime Minister recognise the inevitable and seek at least a one-year extension to the Brexit implementation process?”

Mr Johnson responded: “Our priority is to deal with the coronavirus epidemic and the other matter that he mentions has already, as he will know, been legislated for.”