Brit met with a nightmare 24-hour queue to get home

A British holiday maker is among hundreds of people trapped in Morocco who had to queue for more than 24 hours to get a flight home.

Olive Loveridge-Greene, 26, was enjoying a holiday in the North African country when the Coronavirus pandemic took hold.

Halfway through her trip the Foreign and Commonwealth Office advised against all but essential travel to Morocco, and told tourists to get home as soon as they could. 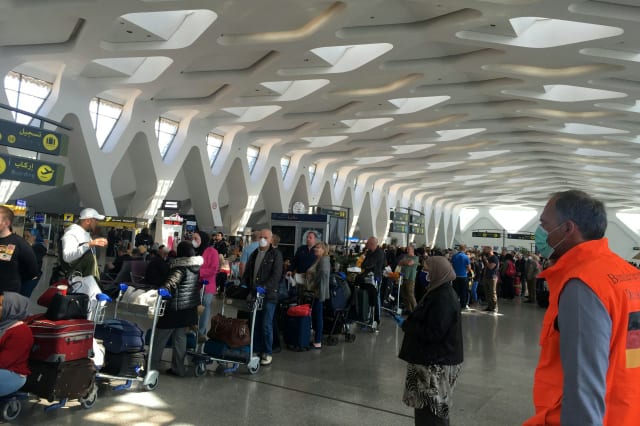 She said dozens of messages, emails and phone calls to Ryanair left her without any help, and the British Embassy told her to head to the airport in Marrakesh.

When she arrived, Olive faced an 800 person long queue for the Ryanair help desk, which she said moved just TEN metres forward in 12 hours.

She slept in the line - and eventually managed to check in for her booked flight, which was due to leave at 7.30am today (18). 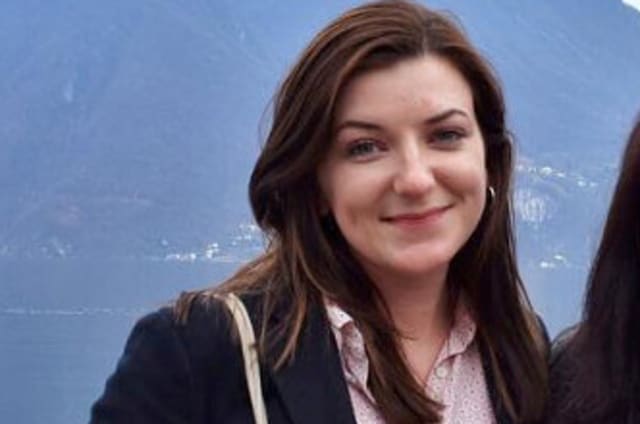 But she is still in the airport - along with an estimated 3,500 others - waiting for the special repatriation flights.

Normal flights between Morocco and the UK were suspended at 11.59pm on Monday.

Olive, a journalist from Bristol, said: "I'm tired. I arrived at the airport at about midday yesterday, 24 hours ago.

"It came off the back of the embassy advice. People have heard nothing from Ryanair and there's contradictory advice out there.

"The embassy is saying to go straight to the airport and there are floods of people waiting here.

"When you call the airline you are either hung up on or told to visit a website that tells you to try the airport.

Olive said she queued for hours but struggled to make any progress, and was nowhere near the front when the Ryanair checkin desk closed last night (17). 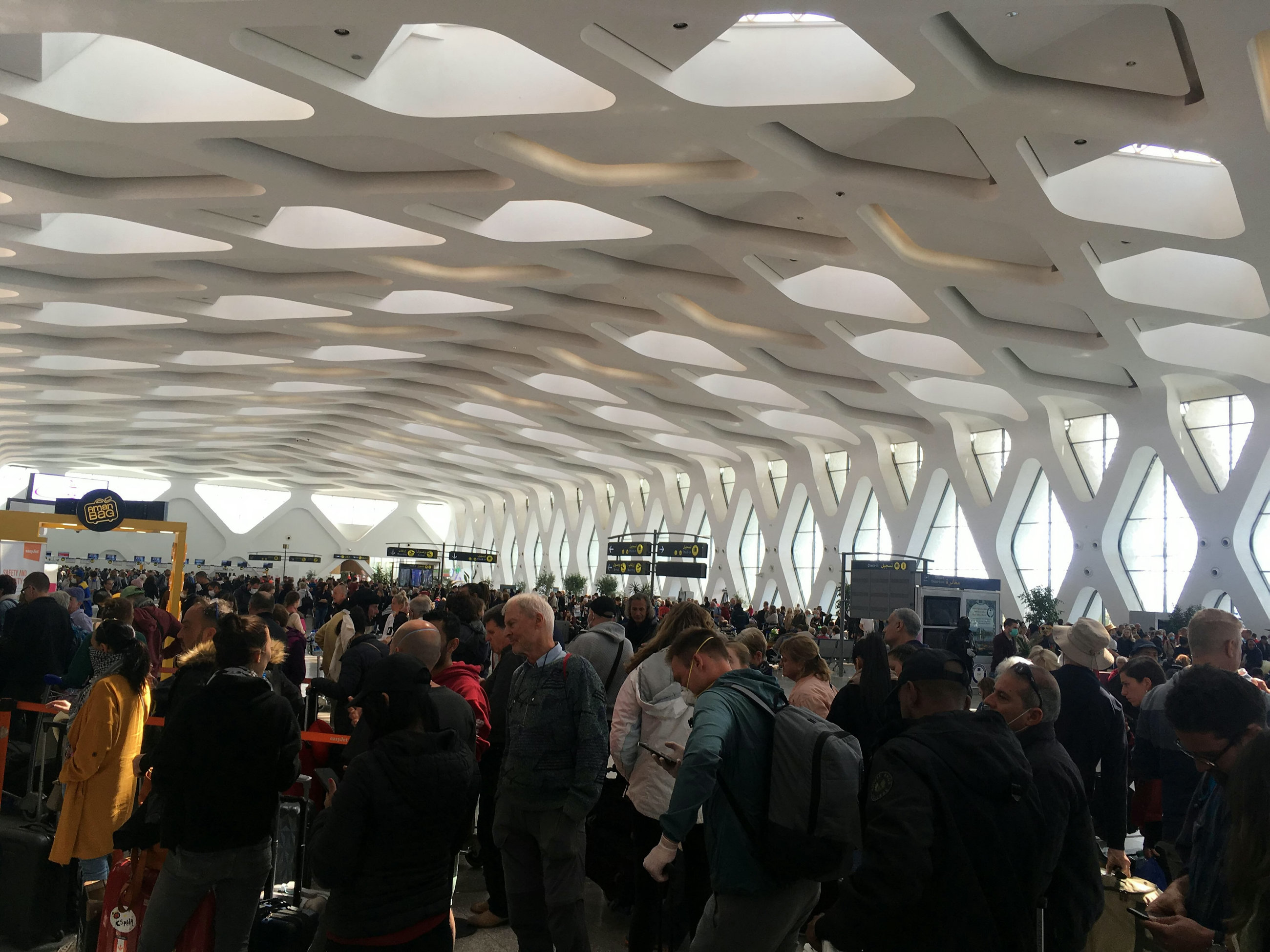 Determined to get home, Olive stayed in the airport overnight and slept in the queue - waiting for the desk to reopen in the morning.

She continued: "The check in desk shut at 8pm. It has been frustrating. I slept at the airport, on the floor.

"Because people left when the desk closed I was about 300 in the queue and I didn't want to give up my spot.

"The aircon was on and it was freezing. I had to use my towel to cover me. I put my cap over my face to block out the light.

"People are panicking and chatting to calm themselves down. I couldn't really sleep."

Eventually, Olive was able to check in for her 7.30am flight today (18) - only to then find out that the plane had been delayed. 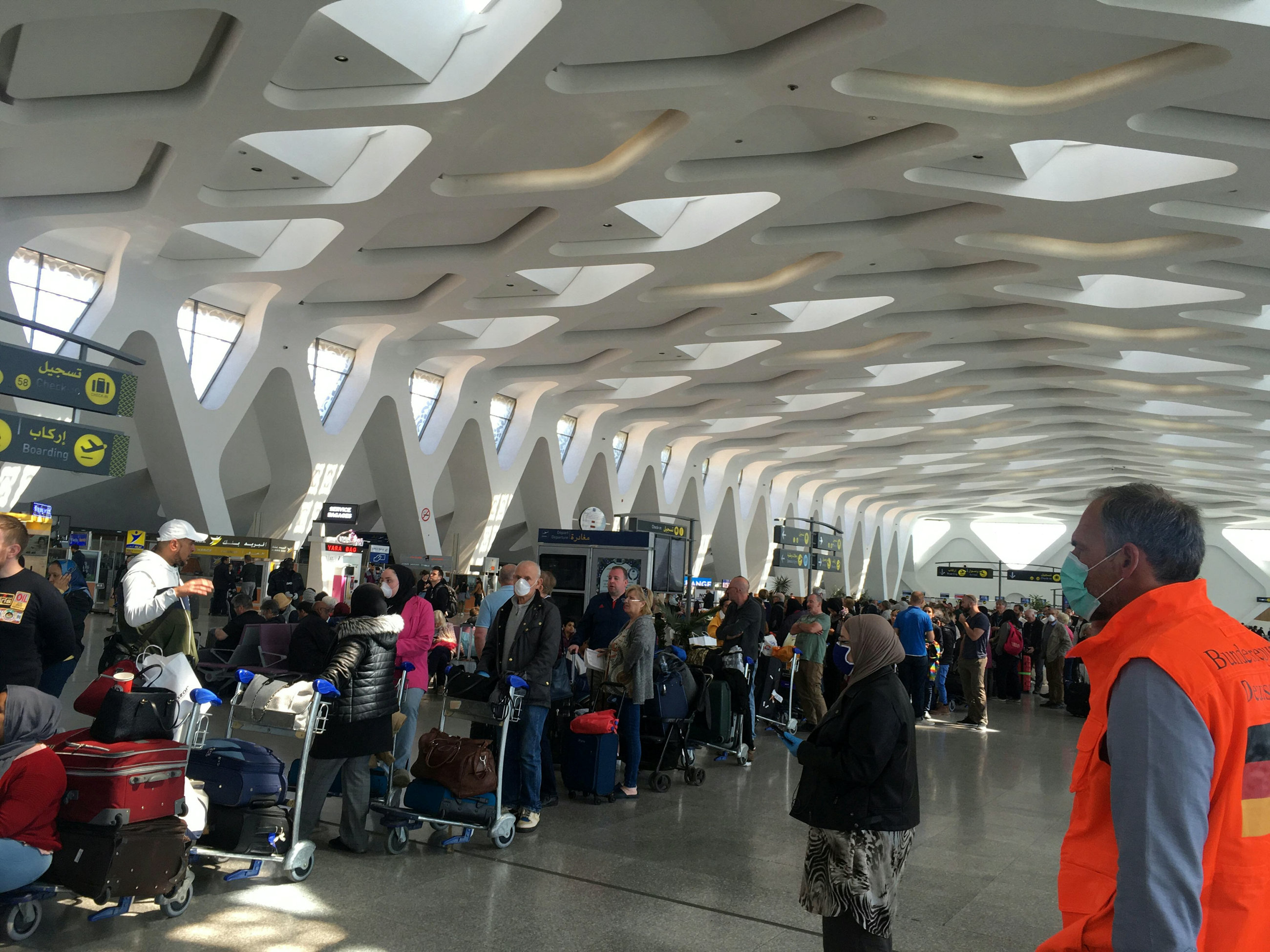 She added: "I eventually managed to check in this morning and I was given a boarding pass.

"When I went through to departures a man checked my pass and ticked my name off a list.

"I had heard the plane was delayed and I asked him if it was true, and if the plane would be cancelled, and he said it was possible.

"The plane was supposed to leave at 7.30am, but nothing yet."

Olive said that she has been struggling to get information while at the airport, and others in the same situation are panicking.

She added: "I've got notifications from the embassy. They said airlines are fighting for airspace.

"I really hope it goes. With the government flights they are been described as an emergency but you have to pay £300 to get on. You don't have to pay for an ambulance, and that's an emergency.

"I'm fortunate that I got a spot on the flight, because I don't have that money.

"It feels like the airlines and the embassy are passing the buck, for passengers to fork out money to get back home is disgusting.

"I'm part of a WhatsApp group called UK Returnees (in waiting) and in there people are saying there have been flights going with empty seats.

"For every 500 messages there's one glimmer of hope. It's just people asking what's going on.

"People are being just like headless chickens. I thought I was clueless but no one knows what's going on."

A Ryanair spokesperson said; " Due to the Covid-19 crisis, we are currently dealing with customer-focused communications.