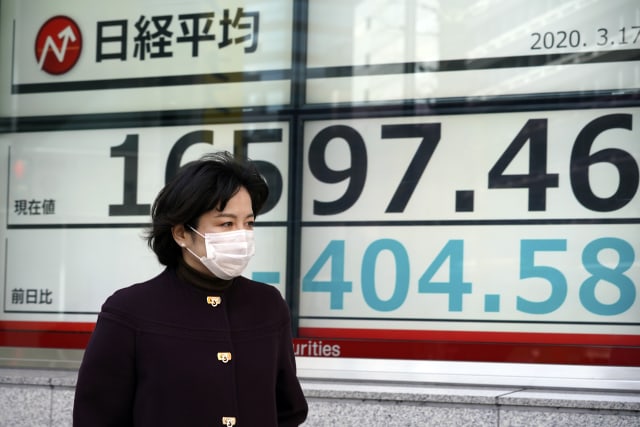 Shares reversed earlier losses in early trading in Asia on Tuesday after the US market suffered its worst day in more than three decades as the coronavirus brought huge swaths of many economies to a standstill.

Monday’s 12% drop for the S&P 500, its worst day since the Black Monday crash of 1987, came as Wall Street figures warned the White House the coronavirus may be dragging the economy into recession.

The rebound in Asia followed news the Trump administration plans strong support for airlines stricken by the outbreak and is pushing the Senate to enact a massive stimulus package to alleviate losses for affected businesses and individuals.

The outbreak has infected more than 182,000 people worldwide, including 4,661 in the United States.

Analysts said bargain hunters appeared to be buying to help fill government oil reserves and on hopes that China’s economy will get a boost from a massive stimulus package yet to be announced.

The Philippine stock market was closed as of Tuesday after the government imposed restrictions on movement in the capital.

Recent losses in global markets are the worst since the 2008 financial crisis.

Monday’s precipitous losses accelerated in the last half hour of trading after President Donald Trump said the economy may be headed for a recession and asked Americans to avoid gatherings of more than 10 people.