Not worth the hassle: Pharmacy to stop selling sanitiser over price complaints 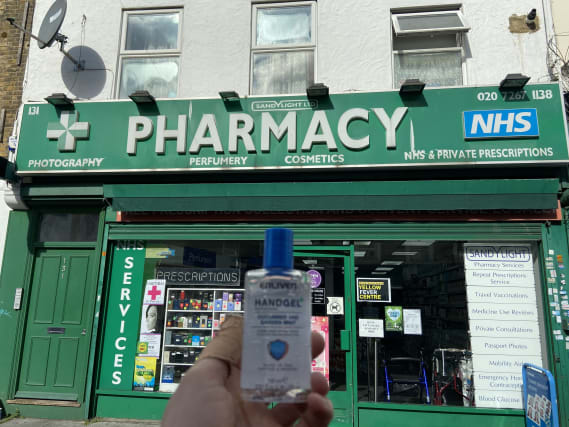 A local pharmacy has said it will stop selling hand sanitiser due to bad publicity over inflated prices of the product amid the coronavirus outbreak.

Bharat Patel, owner of Sandylight Limited – which runs three pharmacies in London, blamed suppliers for increasing costs after posts on social media criticised the price of sanitiser prices at his shop.

The cost of the gel at his Sandylight Pharmacy in Chalk Farm, north London, was one of several highlighted on social media, with some reporting other stores selling bottles for as much as £24.99.

“I’m going to stop selling them because this is earning bad publicity for me and it’s just not worth the hassle,” the 55-year-old told the PA news agency.

“It’s the manufacturers. I used to sell two of these gels for 99p.

“I’ve been in the practice for 35 years, I’ve never seen times like this. Vulnerable people can’t get the gel.”

Mr Patel claimed his suppliers cited importing costs for high pricing because stocks of the product are not available in the UK.

Chris Atkins tweeted a photo of the hand sanitiser cost at Sandylight Pharmacy and said he saw people “in tears” about it when he visited on Monday.

“There were people there in tears going through the coins in their purse,” the 43-year-old told PA.

“We know hand sanitiser is going to save lives. To do that to elderly people who we all know are at the most risk… it’s like war profiting.

“The people in the Second World War who were selling stuff on the side while people were starving, it’s no different to that.”

Mr Atkins, a filmmaker and journalist, said he was “so angry” about the price but decided to buy the product to share a picture of the receipt on Twitter to “shame” the pharmacy.

John Stealer, a 57-year-old taxi driver, pictured a larger family-size bottle of sanitiser being sold at Hampden Square Pharmacy in north London for £24.95.

“I asked the shop assistant the price of the sanitiser prior to the crisis but she was evasive,” Mr Stealer told PA.

“The pharmacist then intervened and blamed the supplier for the price hike.”

PA tried on multiple occasions to contact the owner of Hampden Square Pharmacy directly for comment, but did not get a response.

The National Pharmacy Association told the PA news agency that pharmacies were facing fluctuating wholesale prices on medicines and other supplies like hygiene products.

As a result, a spokesman said, “sometimes they have no option other than to pass this on to customers”.

“We are confident that the vast majority of our members across the UK are acting responsibly and professionally in the support they are giving to patients and customers.

He added: “It’s important that neither manufacturers, wholesalers or pharmacists breach good faith with their customers by introducing unjustifiable mark-ups on prices.”

On Sunday the Financial Times reported that stocks of a key ingredient in making hand sanitisers, isopropyl alcohol, or IPA, are running low and prices for the chemical more than doubled in just two weeks.

The paper reported that the UK has no facilities to make IPA and many independent distributors were sold out of it.

A spokesperson for Shell said: “We are keeping in very regular contact with our suppliers and customers and are increasing the production of isopropyl alcohol where possible.”