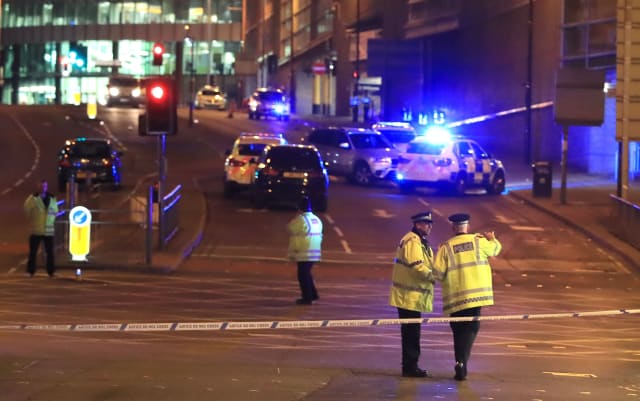 Here are the key dates in the Hashem Abedi murder trial.

2016: Salman and Hashem Abedi’s parents leave for Libya, leaving the brothers to live alone at the family home in south Manchester and signs of “radicalisation” are noted.

January 18, 2017: Hashem orders a litre of sulphuric acid via Amazon using the details of a relative. He also hoards empty tins at his Elmsmore Road home to fashion into prototype components.

January 24: The chemical is delivered to an address other than his home on the same day Hashem bought a Toyota Aygo car for £250.

February 19: The brothers rent a flat in Somerton Court, Blackley, north Manchester, to stockpile the ingredients of the bomb. It was found to have Hashem’s DNA and fingerprints plus traces of explosives.

March 2: Hashem, via another person who cannot be identified, purchases five litres of Sulphuric Acid via an Amazon account.

March 15: An Amazon account belonging to an associate of the Abedi’s, Mohammed Soliman, is used to buy 10 litres of sulphuric acid, with £140 deposited in Mr Soliman’s account.

March 17: The Abedi brothers get the keys to a terrace house at 44, Lindum Street, Rusholme, to use as a delivery address for chemicals.

March 20: An email address, bedab7jeana@gmail.com is set up to order chemicals, the Arabic translation of bedab7jeana being, “To slaughter we have come.”

March 21: Ten litres of sulphuric acid is secured using of the details of their associate, Mr Soliman.

March 22: £300 is put into the bank account of Yahya Werfalli, another associate of the Abedi’s and, on the same day, 25 litres of hydrogen peroxide is ordered, paid for from the same bank account.

March 23: The Abedis, neither of which has a driving licence, crash a Toyota Aygo car they bought two months before, Meanwhile, Mr Soliman is stopped at Manchester Airport and his phone seized.

March 25: Around 2,000 screws and nails, shrapnel for a bomb prosecutors claim, are bought from a hardware store in south Manchester; Hashem’s fingerprints are later found on them.

March 26: An HSBC card in the name of mother Samir Abedi is used to buy £40.99 of tools; a claw hammer, junior hacksaw and blades, tin snips and pliers from B&Q in Stockport.

April 3:  The bedab7jeana address is used to order 30 litres of hydrogen peroxide on Amazon.

April 6: The brothers’ parents are due back in the UK so they must “act quickly”. Thirty litres of hydrogen peroxide is delivered to Lindum Street.

April 13: Hashem and Salman buy a white Nissan Micra for £230 via Gumtree. It is used to store bomb-making items as the flat in Blakely and house in Lindum Street are vacated.

April 15: The brothers and their parents leave the UK for Libya on one-way tickets.

April 20: A £2,000 Student Loan Company grant is advanced to Salman Abedi in his Halifax account.

May 13: A £243 online booking for flight tickets is made for Salman Abedi to fly from Istanbul to Manchester via Dusseldorf, paid out of the Halifax account.

May 14: Salman contacts the owner of apartment 39, 61 Granby Row, Manchester city centre to rent it out on a short term let, a venue to assemble his bomb.

May 18: Salman arrives at Manchester Airport at 10.35am. He goes direct to south Manchester to check on the Micra. He later visits Manchester Arena for the first time and buys batteries, bulbs, tape, cable and a suitcase.

May 19: Salman takes a taxi to the Micra and loads the items he needs into his suitcase before returning to the flat. Later he buys a large money tin, with a removable lid, used to house the bomb. He also buys a large Karrimor rucksack from Sports Direct and orders 5,000 metal nuts from Screwfix online for £296.50p.

May 20: Salman visits B&Q and Screwfix to buy more than 4,000 screws and nuts and a 5 litre paint tin, also used in the explosive device.

10.31pm, May 22:  Salman detonates his rucksack bomb in the foyer at Manchester Arena, murdering 22 bystanders.

May 23: Hashem is detained by militia in Libya and allegedly subjected to torture.

June 1: The Nissan Micra is found in south Manchester. It contains acid, bags and boxes of nails, traces of explosives and Hashem’s fingerprints.

June: Brother Ismail Abedi tells consular officials in London that Hashem and his father were being tortured.

Date unknown: HM Government representatives and two MI5 and MI6 agents, visit Abedi in custody. He said they gave him some Heroes chocolates and there were four ‘militia men’ in the room when they asked if he was okay.

June 16: Hashem claims he is mistreated “most days” from his arrest to his “confession” signed with a fingerprint.

June 23: The defendant tells British consular officials that “worst of the torture” has ended.

November 1: A formal extradition request is submitted by UK authorities.

February 2018: At a meeting at the Home Office, the Attorney General of Libya explained the process for extradition. No Libyan national can be extradited to a foreign country.

June 2018: The Attorney General received a letter from the Passport Office saying Hashem had lost the right to be a Libyan citizen when he became a citizen of another country.

April 10 2019: The Court of Appeal in Tripoli orders Hashem’s extradition.

July 17: Hashem is extradited back to the UK.

July 30: Hashem is interviewed and provides a prepared statement denying involvement in the bombing and radicalisation saying there was an innocent explanation.

December 22: Abedi’s defence team request the disclosure of material relating to allegations of torture and illegal extradition, what British authorities knew and whether they were “complicit”.

January 24 2020: The defence is provided with some material including a statement from Philomena Creffield, head of the UK Central Authority responsible for non-EU extradition, on the extradition.

March 10 2020: Hashem declines to give evidence in his defence and the evidence is closed.

March 17 2020: The jury unanimously convicts Hashem of all 22 counts of murder, one count of attempted murder encompassing the remaining injured, and one count of conspiring with suicide bomber brother Salman Abedi to cause explosions.