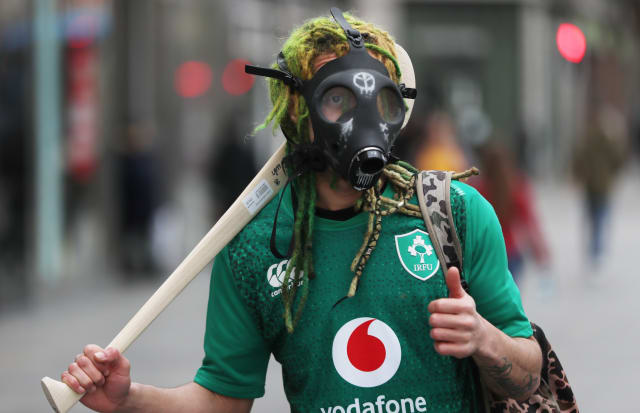 The streets of Irish cities were quiet on St Patrick’s Day in sharp contrast to the usual lively festivities.

Almost all the usual colourful parades that attract thousands were called off following medical advice for social distancing to slow the spread of Covid-19.

Small numbers of European tourists turned out on O’Connell Street in Dublin where the city’s main parade usually takes place.

And there were deserted streets in the popular Temple Bar area.

With pubs closed, visitors instead entertained themselves by taking selfies and buying St Patrick’s Day merchandise.

Just one small religious parade took place at Saul, Co Down, where social distancing was observed.

Instead, church bells across Dublin rang out at 11am to act as a reminder of the faith and as an expression of social solidarity.

Catholic primate Archbishop Eamon Martin celebrated a live-streamed Mass service at Saint Patrick’s Cathedral, Armagh, during which he urged an “outpouring of the works of mercy towards the sick and vulnerable, and for a spirit of generosity and self-sacrifice, compassion and charity in Ireland, and across the world”.

The streets in Belfast were similarly deserted where the annual parade had also been cancelled.

Meanwhile, the annual global greening initiative in which famous buildings around the world are lit up to mark St Patrick’s Day is continuing, including Madison Square Garden in New York, City Hall in Bangkok, the Palace Bridge in St Petersburg, the London Eye, Burj al Arab, Niagara Falls and the Welcome sign in Las Vegas.

Niall Gibbons, CEO of Tourism Ireland, said he hoped the move would “bring a little positivity and hope to people everywhere”.