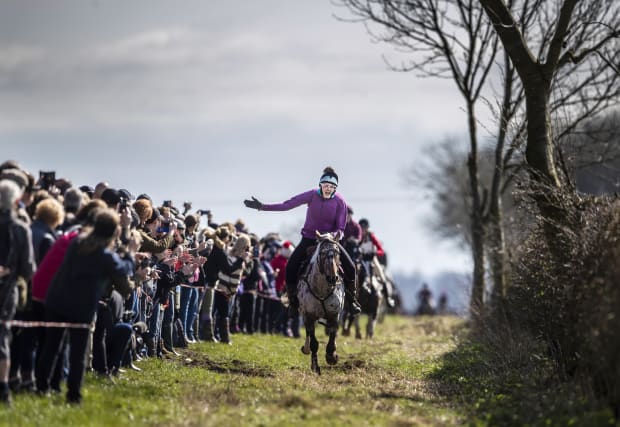 England's oldest annual horse race has been cancelled due to the coronavirus outbreak, organisers have said.

It is believed to be only the fourth time the Kiplingcotes Derby, in East Yorkshire, has not taken place in its 501-year history.

Instead, two riders will walk horses along the four-and-a-half-mile flat course in order to comply with an ancient tradition which states that the race must be run every year or cancelled forever.

The future of the derby has been put at risk several times over its lifetime, with a waterlogged course in 2018, the foot and mouth outbreak in 2001, and four feet of snow covering the course in 1947.

It celebrated its 500th anniversary in 2019, with spectators travelling from across the world to watch the riders compete along the course in the Yorkshire Wolds.

Guy Stephenson, 87, a farmer who helped organise the event for around 40 years, said the cancellation is disappointing.

He said: "It's a bit drastic really and we were in two minds whether to or not but decided we better had.

"We're still going to have two of them to walk over it like they always do, which means the race continues."

The race, which traditionally takes place on the third Thursday of March, dates back to a time when Henry VIII was King of England, with a set of rules discovered in a bank vault giving the start year as 1519.

The course runs along lanes and roadside verges – complete with gullies, deep puddles and rough surfaces – and riders must hack their way to the start before galloping back to the finishing post.

Anyone can enter – as long as they weigh, or carry, at least 10 stone – with the winner receiving a £50 prize.

However, tradition dictates that the rider who takes second place receives £4 of every £5 race entry fee – a potentially much larger reward.