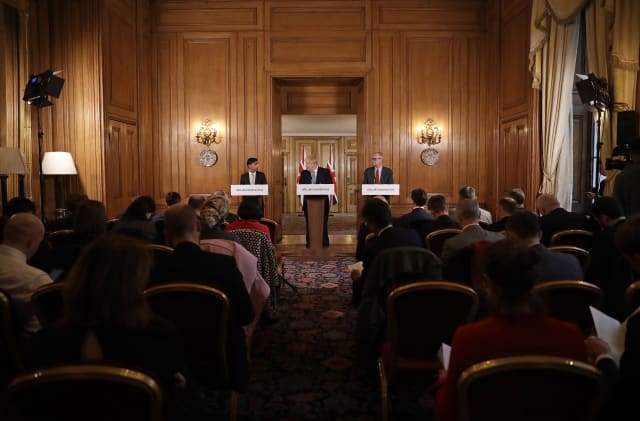 Government-backed loans worth £330 billion are among an “unprecedented package” of measures to help businesses through the coronavirus crisis unveiled by the Chancellor.

Rishi Sunak vowed to do “whatever it takes” to help the economy, as he warned that “never in peacetime have we faced an economic fight like this one”.

It came as the number of people thought to have Covid-19 in the UK rose to 55,000, the NHS moved to cancel all non-emergency surgery and the death toll climbed to 71.

The measures outlined by the Chancellor include:

– A three-month mortgage holiday for homeowners if they are suffering difficulties due to the outbreak so they will not have to pay anything “while they get back on their feet”.

– Cash grants of up to £25,000 to be available to smaller businesses in the retail, hospitality and leisure sectors with a rateable value of less than £51,000.

– The business rates holiday for smaller businesses announced in last week’s Budget will be extended to all businesses in those sectors irrespective of their rateable value.

– The new business interruption loan scheme announced at the Budget is being extended to small and medium-sized businesses, providing loans of up to £5 million with no interest due for the first six months, up from £1.2 million.

The package of tax cuts and grants in this financial year is worth more than £20 billion.

Mr Sunak, speaking alongside the Prime Minister at a Downing Street press conference, said the Government would “stand behind businesses small and large” as he unveiled an initial £330 billion of guarantees equivalent to 15% of GDP.

“That means any business who needs access to cash to pay their rent, their salaries, suppliers or purchase stock will be able to access a Government-backed loan or credit on attractive terms,” he said.

“And if demand is greater than the initial £330 billion I’m making available today, I will go further and provide as much capacity as required. I said whatever it takes, and I meant it.”

The package comes after the public was told to avoid all non-essential contact and travel, while the elderly and those with underlying conditions were told they would have to stay home much more.

Mr Sunak said the impact on the economy would be “temporary” and that the country “will get through it together”.

“The steps that we’re taking mean that we will emerge together on the other side able to rebound back to confidence and economic activity,” he explained.

“That’s why all the interventions we’re looking at are designed to provide that bridge through this – what will be a very difficult, challenging period – but get us through this period and so that we can be there on the other side to emerge stronger thereafter.”

But shadow chancellor John McDonnell said the Government’s package lacked the “certainty” needed to calm public anxiety and would not help workers who were already being laid off.

“In particular, the Chancellor’s claim that new forms of employment support will be developed does not appreciate the urgency and gravity of the situation. Workers and businesses need to know now that they will be supported, not in a few days’ time,” he said.

Boris Johnson warned that Covid-19 is so “dangerous” that without drastic action it will “overwhelm the NHS”, as he said that more “extreme measures” may be needed to protect lives in the future.

And he told the press conference that there are only “a few weeks” to build the ventilators it is expected the NHS will need.

Earlier on Tuesday, the Government’s chief scientific adviser Sir Patrick Vallance told MPs it is hoped the death toll can be kept to under 20,000 as he told of the huge amount of strain the health service will be under from Covid-19.

And, during a hearing of the Commons Health Select Committee, he was asked whether the expected death rate was one fatality for every 1,000 cases, which would mean that there are “potentially 55,000 cases” at present.

Sir Patrick said: “We’ve tried to get a handle on that in Sage (Scientific Advisory Group for Emergencies) and if you put all the modelling information together, that’s a reasonable ballpark way of looking at it.

“It’s not more accurate than that.”

NHS England chief executive Sir Simon Stevens told MPs the NHS would be “flat out” helping coronavirus patients for the next four to six months.

He has sent a letter to hospitals telling them to prepare for a big influx of patients requiring ventilation and ordered moves to cancel non-emergency surgery by April 15 at the latest, alongside the discharge of medically fit people to free up beds.

– A second patient in Scotland diagnosed with Covid-19 died.

– The Archbishop of Canterbury announced that public worship is “suspended until further notice”, but weddings and funerals can still go ahead.

– The Foreign Office advised against all non-essential foreign travel for an initial period of 30 days.

– Routine Ofsted inspections have been cancelled.

– The Airport Operators Association warned UK airports may shut down “within weeks without Government intervention”.

The Prime Minister unveiled a new ministerial structure on Tuesday tasked with convening at daily “C-19 meetings” to refine measures set out at the Cobra emergency committee.

On Tuesday, Mr Johnson told his Cabinet: “We are engaged in a war against the disease which we have to win.”

He stressed that ministers must rise to the challenge of supporting businesses through the “hugely challenging times”, Number 10 said.