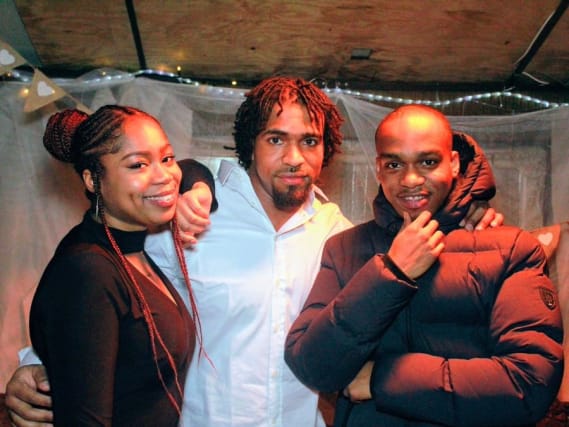 A teenage boy who stabbed a man to death in a brawl after a MoStack rap gig has been found guilty of murder.

The 17-year-old used a machete to kill Andre Bent amid violent scenes in Maidstone, Kent, in August last year.

He was found guilty at Maidstone Crown Court on Tuesday and can now be named as Vasilios Ofogeli after reporting restrictions were lifted.

Ofogeli, of Grove House Road in Hornsey, north London, fled to Greece after the murder but was arrested by detectives who traced him through rap videos he had posted online.

Bodyworn video footage released by police shows officers arresting him near the runway at Stansted Airport.

A jury found him guilty of murdering 21-year-old Mr Bent as well as two counts of attempted murder, one count of wounding with intent and one count of violent disorder.

Co-accused Ryan Lowe-White, 21, of Boyton Close, Hornsey, and Ali Aziz, 24, of McCulloch Street in Glasgow, were both acquitted of causing grievous bodily harm with intent but will be sentenced alongside Ofogeli after they pleaded guilty to violent disorder.

Seven other men also admitted violent disorder and are also due to be sentenced.

A fight broke out among various people who had left the club, who were shown on CCTV to be punching, kicking and hitting each other with belts.

Footage released by police shows Ofogeli wearing a distinctive hooded top, which he wrapped around his head to conceal his identity moments before the brawl broke out.

A large amount of mobile phone footage was posted on social media following the disturbance, and, together with CCTV evidence, police were able to establish that Ofogeli was in possession of a machete-style knife that he first used to stab three other men who have all since recovered from their injuries.

Ofogeli’s final victim however was Mr Bent, who was unarmed and suffered a single stab wound to the chest.

Mr Bent was helped to the Urban Blue charity bus where first aid was administered but was pronounced dead at the scene a short time later.

Ofogeli fled to Athens hours after the murder but was arrested at Stansted when he returned to the UK on August 31.

He tried to convince jurors that he had been acting in self-defence and his barrister, Jeremy Wainwright QC, asked them to consider if the “loud, confusing, violent, fast-moving incident” may have affected the teenager’s ability to think clearly.

However, he was found guilty and will be sentenced on April 24.

Senior investigating officer Detective Chief Inspector Patrick Milford said: “Andre Bent was a popular and much-loved young man with his whole life ahead of him, but his future was cut short by Vasilios Ofogeli in the worst way imaginable.

“Ofogeli and his friends had travelled to Maidstone from their home in London and brought with them a level of violence that we simply do not tolerate here in Kent.

“There is no excuse for anyone to go out while armed with a knife or to cause such serious harm to others, and we relentlessly pursue those who do to ensure they are brought to justice.

“This was a fast-paced investigation that demonstrates our commitment to ensuring justice for Andre’s family most importantly, but also for the people of Maidstone who were shocked and appalled by what happened that night.

“The callous and random nature of the knife attacks committed by Ofogeli on Andre and three other men are deeply troubling and paint a picture of a young man who thinks nothing of attacking others with a deadly weapon. He is fully deserving of the lengthy prison sentence he will now have to serve.”