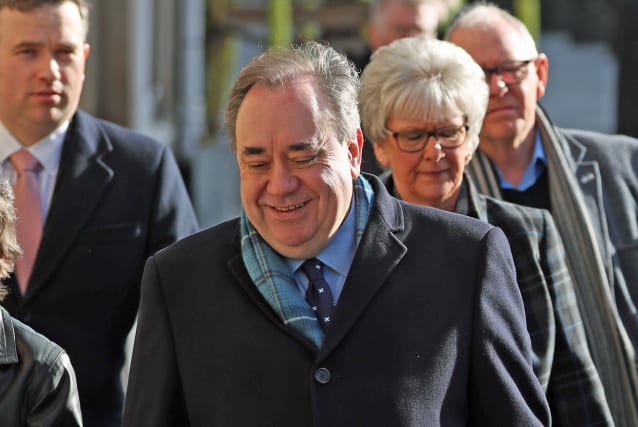 Alex Salmond has told a court that a woman who has accused him of attempted rape had been among his “biggest cheerleaders” until he did not help her with a political project.

The former first minister of Scotland gave evidence at the High Court in Edinburgh on Tuesday.

He faces allegations of 13 offences against nine women, all of which he denies.

Salmond spoke for almost four hours, claiming he had a “consensual sexual liaison” with the complainer and he believes some of the accusations against him have been “deliberate fabrications for a political purpose”.

The former Scottish Government official, known as Woman H, previously told the court she felt “hunted” by Salmond moments before an alleged attempted rape in the first minister’s official residence, Bute House in Edinburgh, in June 2014.

She also said she had been sexually assaulted by him in May 2014 when he allegedly kissed her face, neck and touched her legs.

Salmond said no incidents took place during those months but there had been a consensual “sexual encounter” the previous year following a dinner.

Under questioning from his lawyer Gordon Jackson QC, he said: “There was then a consensual sexual liaison.”

He added: “Neither party were naked but in a state of partial undress, in terms of buttons or whatever.

“It shouldn’t have happened but both of us agreed it would be put behind us.”

It was heard she had been one of his biggest “cheerleaders” until he failed to help her with a political project and had been left “annoyed”.

Salmond said: “The first indication I got of any allegation was in January 2018.

“I didn’t pay the friendly warning – or whatever it was – any regard, basically, because I had no reason to fear a complaint from (Woman H).”

The 65-year-old said her account of an alleged attempted rape was “not true” and she was not at Bute House on the night in question.

Alex Prentice QC, for the Crown, suggested: “You attempted to rape her.”

He insisted he does have respect for women during questioning from Mr Prentice.

The former first minister told jurors he has never had a non-consensual relationship with a woman while being questioned about another allegation that he assaulted a woman with intent to rape in his bedroom at Bute House in late 2013.

Salmond said he and a Scottish Government official, known as Woman F, had engaged in a “sleepy cuddle” on a bed after they drank the Chinese spirit Maotai.

He claimed he said sorry two weeks later when the issue was raised by one of his staff but he had not intended to rape her.

The accused said: “I apologised. I was the first minister. She was in my bedroom. We were tipsy, it shouldn’t have happened.”

Earlier, he said one of his accusers had encouraged at least five other people to exaggerate or make claims against him.

The senior Scottish Government official, known as Woman A, said he sexually assaulted her in Glasgow between June and July 2008.

But Salmond told the jury: “I would never, under any circumstances, be touching (the complainer) inappropriately.”

He also denied running his hands down her body at a nightclub in Edinburgh in December 2010.

“It is a fabrication, just as she has encouraged at least five other people to exaggerate or make claims against me,” he said.

Salmond said he wished he had been more “careful” with personal space and did not mean to offend.

He added: “I’m of the opinion, for a variety of reasons, that events are being reinterpreted and exaggerated out of all possible proportion.”

Salmond agreed with his lawyer that “things that didn’t happen” or “innocent things” had been “turned into sexual offences”, as he was taken through the charges against him.

He said a civil servant in the Scottish Government, known as Woman B, had “misremembered” an incident where she accused him of grabbing her and trying to kiss her following a meeting in Bute House in 2010.

He said: “It was a joke, it was hijinks, it was a piece of fun. It was not meant to be anything more than that.”

Mr Prentice repeatedly questioned the accused whether he had considered the complainer’s feelings, but Salmond said it had been meant as a joke.

He added: “I don’t agree it was entirely inappropriate but I wouldn’t do it again.”

Salmond denied claims there was a policy that prevented him being alone with female civil servants at Bute House.

He is on trial over accusations of sexual assault, including an attempted rape, spanning a period between June 2008 and November 2014.