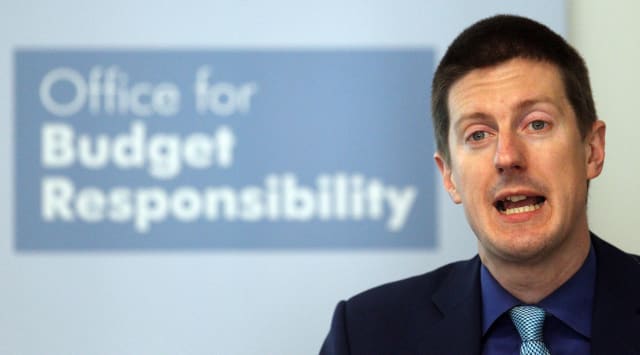 Britain is facing a wartime scenario and the Government must spend and “not be squeamish” about ballooning debt levels to help the UK survive coronavirus, according to the fiscal watchdog.

Experts at the Office for Budget Responsibility (OBR) told MPs the Chancellor’s £12 billion support announced to tackle Covid-19 in the spring Budget was a helpful “down-payment”, but that more was needed and fast.

The Government could consider paying energy bills for struggling households, replacing lost revenues for firms large and small and reimbursing struggling companies for staff wage bills among a raft of emergency support suggested by the OBR.

Bosses at the independent forecaster also suggested the Government should act as an insurer of last resort as the insurance sector is expected to struggle to meet payments from firms and individuals.

Robert Chote, chairman of the OBR, told a Treasury Select Committee hearing: “This is not the time to be squeamish about one-off additions to public sector debt.

“It’s more like a wartime situation – that this is money well spent.”

He added: “The priority is not to worry about dotting the Is and crossing the Ts of fiscal rules but to do what is necessary for the economy and the public.”

The OBR cautioned there would “inevitably be some scarring” on the country’s economy, with a number of firms expected to go bust amid the crisis.

But it said the hit was expected to be “large but temporary”, both to Britain’s growth as well as the public finances.

The key is to ensure support is given now to help ensure the effects are not long-lasting and that the economy can pick up once the outbreak passes.

“The more serious this is, the more blunderbuss you have to be in the approach,” Mr Chote told MPs.

Sir Charles Bean, a member of the OBR and former deputy governor of the Bank of England throughout the financial crisis, said the Government needed to essentially replace lost output through extra borrowing.

He suggested the Government could replace lost revenues, but said this would be needed across all sectors as the impact of the Covid-19 hit is likely to spread far wider than just the travel and retail sectors.

There were fears after last week’s Budget that the Government’s spending spree – described by the OBR as the biggest “Budget giveaway” since 1992 – would leave the UK’s public finances vulnerable.

The OBR forecast that the Budget spending announcements would add around £100 billion to public borrowing by 2024, as it also warned a recession was “quite possible” if Covid-19 causes further havoc for businesses and workers.

But Sir Charles told MPs on the cross-party committee that the escalation of the outbreak meant the Government was right to put concerns over the Budget deficit to one side.

“It’s better to spend and end up spending a little bit too much here than not doing enough,” he said.