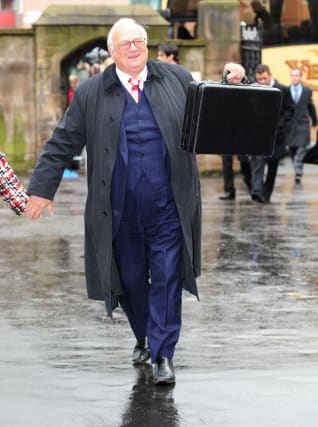 Roy Hudd had a wide-ranging career on stage, television and radio spanning decades after starting out performing in variety shows.

His interest in entertaining was sparked by his grandmother, who would regularly take him to Croydon’s Empire Theatre in south London, which was near to where he grew up.

However, before he got his break as a performer, Hudd, who was born in 1936, had a number of different jobs.

These included working at a telephone exchange for the RAF and as a messenger for an advertising agency, as well as jobs as a window dresser and a commercial artist.

When he finally started out as a comic towards the end of the 1950s, he was known by his stage name, The Peculiar Person.

He later became a Butlins Redcoat entertainer at a holiday park in Clacton, Essex, where he worked alongside singer Sir Cliff Richard.

Hudd then went on to perform in variety shows in London and developed a lifelong association with the genre, writing several books on the topic and serving as president of the British Music Hall Society.

However it was in satirical comedy that Hudd made his name after he began his TV career in 1964 with the series That Was The Week That Was in an era that was dubbed the “satire boom”.

Hudd was perhaps best known for the long-running programme The News Huddlines, which ran for 26 years from 1975 to 2001.

After the programme stopped being broadcast, he went on to perform roles in a variety of hit TV dramas including Call The Midwife, Midsomer Murders, Ashes To Ashes and Broadchurch.

He also starred in a number of soaps, playing undertaker Archie Shuttleworth in Coronation Street, as well as appearing in Holby City and Casualty.

Hudd, who has a son, Max, from his first marriage, lived with his second wife, Debbie Flitcroft, in south London.

The pair met while working together in panto in Nottingham.