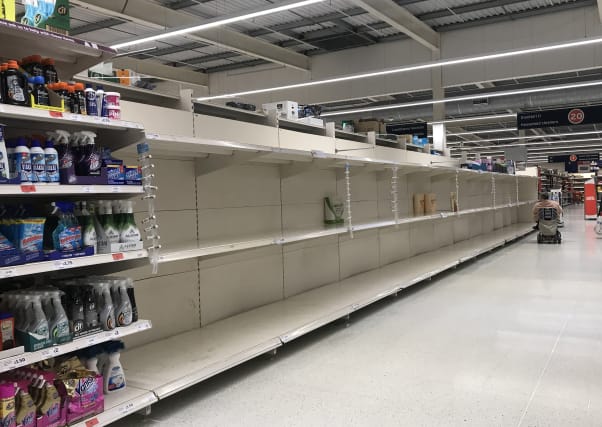 Retailers have reported a rise in abuse of staff amid coronavirus panic-buying, despite supermarkets calling for calm from shoppers.

It comes after a chaotic weekend for retailers, which saw their shelves emptied of essential items such as toilet rolls, cleaning products, dried pasta and tinned food, after the virus outbreak was classified as a pandemic.

Supermarket websites and online grocers including Ocado are also suffering from huge surges in orders, with some key items being rationed per customer.

Chief executives are in discussions with the Government about limiting products to ensure key lines remain in stock, although the prevailing view is that supply chains are holding up.

The British Retail Consortium (BRC) said staff have been the victims of abuse in recent days, but retailers are working with the police to keep stores “running as smoothly as possible”.

Andrew Opie, director of food and sustainability at the BRC, said: “Even when circumstances are difficult, retailers are well versed in providing effective security measures.”

On Sunday, the UK’s largest supermarkets wrote to customers calling on them to be “considerate” and stop stockpiling, amid frantic scenes in stores.

Panic-buying by customers has resulted in some supermarkets rationing sales of certain products in a bid to ensure supply is available to more shoppers.

On Monday, Morrisons told shoppers it is increasing the amount of food it makes at manufacturing sites, increasing the volume of stock sent to stores and “introducing temporary purchase limits” on products with high demand.

The supermarket has also said it will extend its home delivery service as retailers’ online operations attempt to cope with a surge in demand.

Ocado said it has seen “exceptionally high demand” on its website, meaning delivery slots have sold out “quicker than expected”.

The online supermarket said it had to take its app offline “due to performance issues driven by continued high demand”.

Other supermarkets have also seen delivery slots fill up rapidly, with some shoppers saying on social media they have been unable to book home deliveries until April.

Environment Secretary George Eustice has continued to hold daily phone calls with supermarket chief executives to ensure customers will have the necessary supply of provisions.

A Defra spokesman said: “We have a very reliable food supply system, which we have gone through as part of our no-deal planning for Brexit.

“There is no concern that we will be unable to get enough into the country.

“What we are focused on is ensuring food can get to the shops so that people can buy it, and how to get it to people who are self-isolating.

“In the meantime, we are urging people to pull together and help our neighbours.”

Analysts have suggested that supermarkets might cut down on their range of brands or products in response to the outbreak.

Bruno Monteyne, retail analyst at Bernstein, told BBC Radio 4’s Today programme: “You can probably get 10% or 15% productivity improvement out of simplifying the range.”