Over-70s in Scotland treated no differently to rest of UK, Sturgeon insists 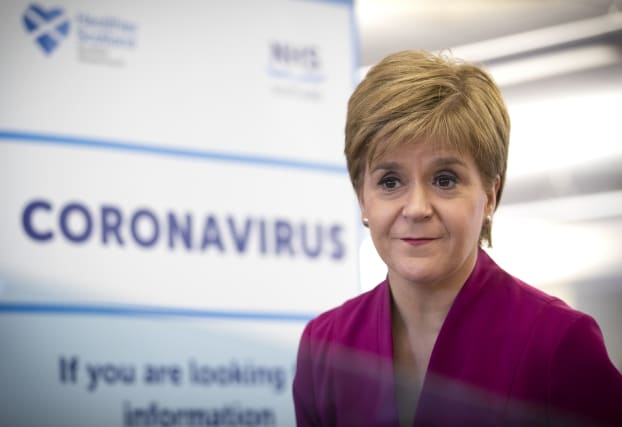 Scotland is taking the same approach to the rest of the UK in considering asking elderly people to reduce social contact amid the coronavirus outbreak, the First Minister has said.

Nicola Sturgeon said social distancing of the over-70s and not isolation was the policy being discussed by the UK Cobra committee.

She also said decisions about tackling coronavirus will be taken on a “four nations basis” as far as possible and she expects there to be “significant commonality” between them.

Earlier, UK Health Secretary Matt Hancock announced elderly people are likely to be asked to self-isolate for up to four months – news that emerged from anonymous briefings  – while Scotland’s Health Secretary Jeane Freeman said Scotland is not planning on isolating the over-70s over coronavirus fears.

Speaking at a briefing in Edinburgh on Monday, Ms Sturgeon said: “Cobra is looking at a range of actions but also what is the optimal timing of some of these actions, firstly social distancing for people over 70 and some vulnerable groups such as, for example, those currently eligible for the flu vaccine.

“There’s speculation in the media that Scotland is proposing a different approach to the over 70s than the rest of the UK.

“I want to be very clear that is not the case, the position the Cabinet Secretary and our national clinical director have been articulating around social distancing of these groups not isolation of these groups is the policy that Cobra has been discussing and will discuss later today.”

She said the country is facing a “very challenging and in our lifetime unprecedented situation in the months to come” and urged people to pull together to tackle it.

Scotland’s national clinical director Professor Jason Leitch said over-70s will be asked to reduce social contact but family visits from people without symptoms will not be banned.

He added school closures are “not inevitable” as this measure does not help with the spread of the virus.

Speaking on BBC Radio Scotland’s Good Morning Scotland programme, he said parts of the UK are in “lock-step”, adding: “We will almost certainly, as a four-country UK, we will move to a position in the next few weeks where we will ask those groups (the over-70s and those with pre-existing conditions) to not stay at home in the social isolation way that we are telling the symptomatic to do so but to reduce their social contact.”

“What we are not suggesting, unlike those with symptoms, is that those people would cut off family contact and not be able to receive visitors.”

On school closures, he said: “Schools don’t help us much with the spread of the virus. It seems counter-intuitive, I know.”

He said it might be appealing to close schools and colleges, “shut the border, hunker down … and reopen in two weeks’ time” but added: “It doesn’t work. The science suggests the virus will be there.

“So when you reopen, the vulnerable will be hit again and your spike will just be later.”

His comments came as a handful of schools across Scotland closed after Covid-19 was identified either at the school or in the community.

As of 2pm on Sunday, Scotland had 153 confirmed cases of Covid-19, with one death following the virus.