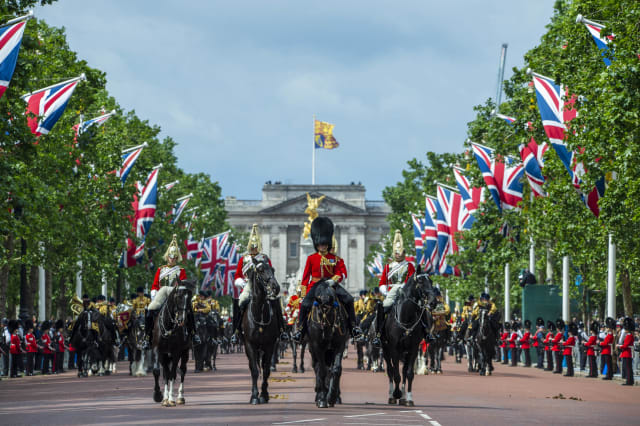 High-profile appearances bringing together large crowds have always been a major part of the royal family’s calendar.

But Prime Minister Boris Johnson has warned that the Government is no longer supporting mass gatherings.

All people in the UK should avoid pubs, clubs and theatres, stop all non-essential contact and travel, and work from home if they can, he said.

Mr Johnson said the advice to avoid all social contact is particularly important for people over 70.

Here is a look at some of the main royal events likely to be affected.

– Japanese state visit to the UK

British pomp and pageantry is at its best during a state visit.

Japan’s Emperor Naruhito and Empress Masakois are due to stay with the Queen at Windsor Castle in May, but the Foreign Office will advise the royal household whether the visit will go ahead.

State visits are a huge undertaking, with hundreds of royal household staff, members of the military and police officers needed to ensure the smooth running of programmes.

Key elements include a ceremonial welcome by the armed forces and a grand state banquet for 170 guests including senior royals, politicians and dignitaries.

State visits have been postponed before.

A stay by Spain’s King Felipe in 2016 was delayed to June 2017 due to a political crisis in his country, and again to July 2017 because of the UK general election.

A state visit by King Abdullah of Jordan was postponed in 2000 because of the crisis in the Middle East amid Israeli-Palestinian fighting.

Mass celebrations have been planned for the 75th anniversary of VE Day in May, with elderly members of the Second World War generation encouraged to take part.

Commemorations are set to include a procession down The Mall in London, a service at Westminster Abbey, a Battle of Britain memorial flight above Buckingham Palace, and street parties across the country.

The Queen and the royals would normally be expected to play a key role in celebrations marking the end of the Second World War.

The traditional early May bank holiday has been moved from Monday May 4 to Friday May 8 to celebrate the anniversary.

Beatrice, the Duke of York’s eldest daughter and the Queen’s granddaughter, is preparing to marry Edoardo Mapelli Mozzi on May 29.

The ceremony for 150 guests is meant to take place in the Chapel Royal at St James’s Palace in London, and the reception is planned for the garden of Buckingham Palace.

The Queen’s garden parties are held between May and July.

More than 8,000 guests at a time mingle on the lawns of Buckingham Palace in London or at the Palace of Holyroodhouse in Edinburgh.

Although the event is outdoors, guests – many of them elderly – gather to watch the Queen go past.

They also queue in tea tents and take their seats in nearby chairs, with around 27,000 cups of tea, 20,000 sandwiches and 20,000 slices of cake consumed at each party.

The Duke of Sussex, who is quitting as a senior royal at the end of the month, has been gearing up for his Invictus Games in The Hague, Netherlands, in May.

The global competition is likely to be under threat this year because of the prospect of bringing together current and former servicemen and women from more than 20 countries.

Tourists flock to see the annual celebrations for the Queen’s official birthday on the second weekend in June.

The Queen and other royals take part in a carriage procession, watch the event on Horse Guards Parade in central London and gather on the Buckingham Palace balcony to watch a celebratory flypast.

It has only been cancelled once during the Queen’s reign – in 1955 – due to a national rail strike.

According to the event’s website, the Queen has never missed a Royal Ascot since acceding to the throne.

It is one of the highlights of the monarch’s year, and she has owned 22 winners at Ascot, including Estimate, who won the Gold Cup in 2013 – the first time in the race’s 207-year history that it has been won by a reigning monarch.

Royal Ascot is due to begin on June 16.

Heir to the throne the Prince of Wales, who has secured his future role as head of the Commonwealth thanks to the Queen’s lobbying, would be expected to attend CHOGM in Kigali in June.

The event at the end of June features the leaders of the 54 Commonwealth countries.

An investiture ceremony is due to take place at the palace on Wednesday.

Each investiture, held in the palace ballroom or at Windsor Castle, is attended by more than 60 people, receiving a range of accolades, from MBEs to knighthoods and damehoods, plus their guests.

The Queen – who wore gloves for the first time at a palace investiture this month – greets each recipient in turn on the red dais and shakes their hand.

Charles has been welcoming guests with a namaste during his investitures.

Each summer, while the Queen is away at Balmoral, thousands of tourists descend on Buckingham Palace for the annual opening of the royal residence’s state rooms to the public.

Visitors are treated to a themed exhibition each year, with the 2020 display dedicated to royal animals.

It is not known yet whether the summer opening will go ahead, whether there will be enough staff to facilitate it or how much of the population could still be required to be in self-isolation at that stage.