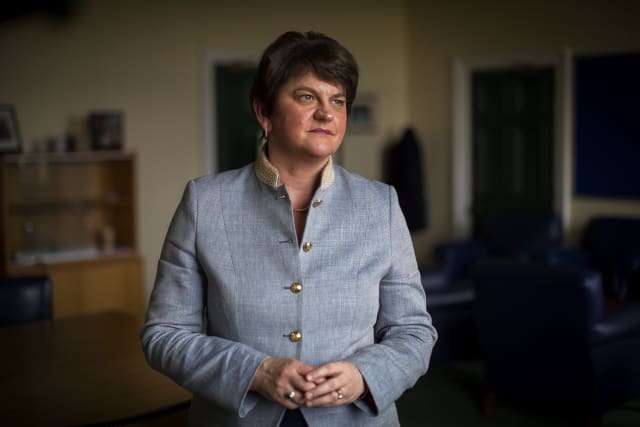 Arlene Foster has paid emotional tribute to those who stuck by her in the face of unfounded corruption allegations about Stormont’s botched green energy scheme.

The First Minister and DUP leader’s voiced cracked as she reflected on the “dark” times she experienced since the Renewable Heat Incentive (RHI) controversy brought down powersharing more than three years ago.

Mrs Foster was addressing the Assembly chamber on the findings of the public inquiry into the ill-fated scheme.

The probe identified numerous failings across government but rejected claims that corruption had played a part.

“Thank you to those who, with my family, never stopped believing in me as a person of integrity,” she said.

“I will reward their faith by learning the lessons, by fixing the problems, by making Northern Ireland a place the next generation can be proud of.”

Her comments came as Finance Minister Conor Murphy announced a range of measures to address the issues highlighted by the RHI inquiry panel, which was chaired by retired judge Sir Patrick Coghlin.

These include a revised code of conduct for Stormont ministers and new guidance for ministers in the exercise of their official functions.

Mr Murphy has also set up an independent panel to identify any potential misconduct by civil servants in relation to the RHI.

Mrs Foster, who was criticised in the inquiry for some of her actions in the scheme’s development, reiterated her apology for her mistakes.

“I came into politics not for position nor for personal gain, but to try and advance the values that are important to me to help make people’s lives better here in Northern Ireland,” she said.

“I want Northern Ireland to thrive and I want to heal the divisions and I want better opportunities for the next generation, and that’s what motivates me.

“That’s why I have such deep and personal regret at the mistakes that were made in this scheme, particularly those opportunities that I had or could have taken to address some of the issues that subsequently emerged.

“So having the right motivation does not prevent mistakes, oversights or omissions and I must learn from what has been pointed out by the inquiry.

“But, when I look back, it was the allegations of corruption that were of the utmost concern.

“To allege that someone is corrupt is amongst the most damaging accusations to be levelled against anyone.

“I therefore welcome the clear and categorical finding by Sir Patrick that corruption played no role in the failure of this scheme.

“To those who made such claims they should now publicly accept this finding and as a lesson to everyone on these benches, and the benches opposite, for the future – before questioning anyone’s integrity wait for the facts.

“Don’t look at the subject as a political rival, look at them as a father, mother, son or daughter who at least deserves to have a fair hearing.

“None of us are perfect, we will make mistakes and for the errors I apologise.

“For my role as First Minister I will learn the lessons and for the future all criticised must act and do better.”

Mrs Foster said her Christian faith had sustained her through the criticism levelled at her over the RHI.

She also thanked friends and family, saying: “The love and support of my friends and colleagues both inside and outside this great party, and my precious family who had to listen to so many people speak of their wife, daughter, sister and mother in such a disparaging way, but who never stopped believing in me as a person of integrity.”

The RHI incentivised businesses and farmers to switch to eco-friendly boilers by paying them a subsidy for the wood pellet fuel required to run them.

But mistakes in its designs saw the subsidy rates set higher than the actual cost of the wood pellets – with applicants finding themselves able to burn to earn.

The controversy over the RHI led to the collapse of Stormont powersharing, after the late Sinn Fein deputy first minister resigned in protest at Mrs Foster’s handling of the affair in January 2017.

The RHI had left the administration facing an overspend bill of hundreds of millions of pounds. Subsequent cost-control steps have prevented that happening.

But the probe said it would be wrong to blame specific individuals or groups for the design flaws that saw applicants “perversely incentivised” to burn excess heat to turn a profit.

He said responsibility should be shared among a wide range of people and public bodies.

Describing the schemes as a “project too far” for Stormont, Sir Patrick warned that unless the failings were addressed he could not guarantee the same mistakes will not be repeated.

Mrs Foster, speaking at the outset of a debate on the RHI report findings, said the inquiry had shown there was “no good reason to bring these institutions down and keep them down for so many years”.

She said there was a need for action to address “structural and systematic failings”.

“Colleagues, this is not a day for recrimination,” the First Minister added.

“It is a day for learning. I acknowledge my role in damaging public trust but I am determined to play a full part in rebuilding that trust and doing all that I can to ensure a better way of working as we move forward.”