Death of 14-year-old boy could have been ‘joke gone wrong’, coroner finds 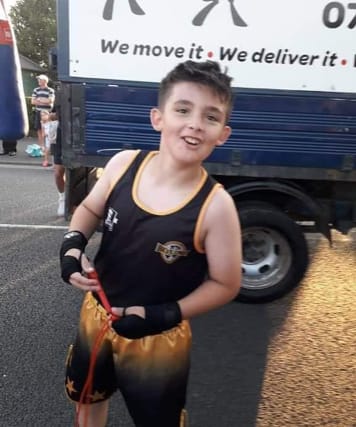 The death of a 14-year-old boy, who was found by his younger brother, may have been a “joke gone wrong”, a coroner has found.

Liam Evans was a talented boxer with a loving family and close circle of friends.

His death devastated his family and his friends at Sandwich Amateur Boxing Club, who knew him as “Little Rocky”.

At the inquest into his death, on Monday, a coroner found no evidence that Liam intended to take his own life, and apologised to his family for not being able to provide answers.

On December 11, 2019 he had gone upstairs to his bedroom after dinner while his father and brother watched football.

At half time his 10-year-old younger brother went up to tell him the score and found him unconscious.

Paramedics were called and were able to start his heart again, but Liam was declared dead in hospital the next day.

An inquest into his death took place at County Hall in Maidstone, attended by some of Liam’s family.

The hearing was told that Liam had been boxing for four years and had just changed clubs so he could progress.

He lived in Deal, Kent, and was described as “happy, compassionate and sensitive”.

Detective Sergeant Julian Kyte, who investigated his death, said that Liam “rarely got angry” and would tell people if he was upset.

He added: “No significant concerns in relation to his own behaviour, the only issue was around Liam’s weight.

“I think this sometimes caused him to become anxious, because of the link to his boxing and trying to prepare for fights and so forth.”

The inquest heard that on the evening in question he had gone to boxing training and found that he was 1.5kg above the weight he was hoping for.

However Mr Kyte said that he “appeared fine” and there were no issues during the day as far as he could see.

After eating dinner Liam went upstairs to play guitar while his father, Mark Evans, and his brother watched football.

Mr Evans said he heard some noises but assumed it was Liam exercising, the inquest heard.

However when his brother went into their shared room during the half time break in the game he found Liam suspended.

His father started CPR and called 999. Paramedics and police arrived and Liam’s heart was restarted. He was taken to William Harvey Hospital in Ashford for treatment.

However the following day the decision was made to withdraw treatment and Liam was pronounced dead.

A postmortem examination concluded that the cause of death was fatal pressure to the neck.

Mr Kyte said it was not known how he came to be suspended in his room, saying that there was some suggestion he could have been “messing around”.

He said: “It might have been a joke gone wrong.”

Area coroner Katrina Hepburn noted the concern about Liam’s weight, but said there was “nothing to suggest in any way” he was intending to take his own life.

She said: “I really have no clear evidence before me as to what Liam was doing that evening in his room.

“I cannot say what Liam was doing but it went wrong. I do not think that it was a suicide.”

Ms Hepburn said she did not know if it was “a practical joke for a family member or if he was just trying to do something for his own reasons, but it did go wrong”.

She returned a conclusion of misadventure, calling it a “tragic, tragic accident”.

Addressing Liam’s family, she said: “I offer my sincere condolences for this tragic loss in one so young, and in particular in a case where I cannot offer you an explanation for what happened.

“I am sorry I can’t answer the questions that I am sure you go away still having.”

In a tribute to Liam after his death, Sandwich Amateur Boxing Club posted on Facebook saying: “RIP our little Rocky. Heart of a lion, and that heart has stopped beating.

“You will ALWAYS be part of our club. In our hearts, in our thoughts.

“We are absolutely devastated. We are proud to be your boxing family and will treasure our memories of you. Miss you champ.”