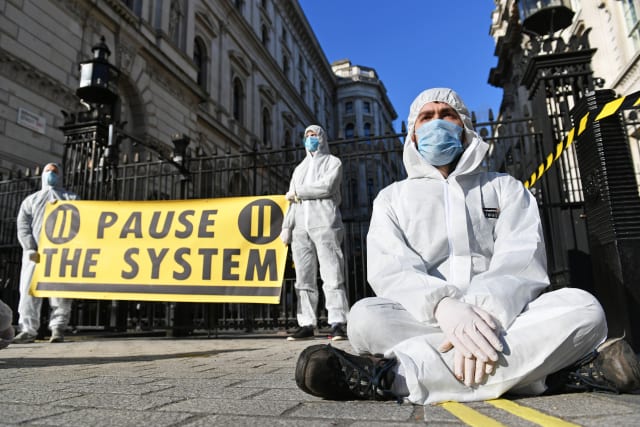 Boris Johnson is to hold a televised press conference to update the public on the fight against coronavirus, as the UK moves towards banning mass gatherings and asking the elderly to stay at home more.

The Prime Minister will chair an emergency meeting of the Cobra committee on Monday, before holding the first of a series of daily press conferences to update the public on Covid-19.

It comes as there was confusion over exactly what elderly people will be asked to do going forward, after Health Secretary Matt Hancock said on Sunday they will be asked to stay at home for a very long time.

On Monday, Transport Secretary Grant Shapps said people over the age of 70 will be asked to self-isolate “as and when the moment is right” – but that they would still be able to go outside and “walk the dog”.

He said: “We will ask people to do that as and when the moment is right.”

He said it is “quite likely” that elderly people would have to self-isolate for months, but added: “It is the case that people will be able to go out and walk the dog. It’s about being sensible, but not mixing in crowds.”

But Scotland’s national clinical director said elderly people across the UK will not be asked to stay at home.

Professor Jason Leitch said this group will be asked to reduce social contact, but family visits from people without symptoms will not be banned.

Speaking on BBC Radio Scotland’s Good Morning Scotland programme, he addressed concerns about the apparent variation in advice from the Scottish and UK Governments.

Mr Leitch said parts of the UK are in “lock-step”, adding: “We will almost certainly, as a four-country UK, we will move to a position in the next few weeks where we will ask those groups (the over-70s and those with pre-existing conditions) to not stay at home in the social isolation way that we are telling the symptomatic to do so, but to reduce their social contact.”

“What we are not suggesting, unlike those with symptoms, is that those people would cut off family contact and not be able to receive visitors.

“In fact, quite the opposite, we expect family contact to increase in that group so that those people will be looked after. The last thing that we want is four months of loneliness.

He added that school closures are “not inevitable”, as this measure does not help with the spread of the virus.

He added it might be appealing to close schools and colleges, “shut the border, hunker down… and reopen in two weeks’ time”, but added: “It doesn’t work.

“The science suggests the virus will be there. So when you reopen, the vulnerable will be hit again and your spike will just be later.”

As the UK death toll reached 35 on Sunday, Mr Hancock said over-70s could be told to stay at home for up to four months within the “coming weeks”.

– Flight schedules have been slashed by British Airways’ parent company IAG and easyJet.

– Interactions between firefighters and the public should temporarily be drastically scaled back, the Fire Brigades Union (FBU) has said.

– Travel company Tui said it was suspending the vast majority of all travel operations until further notice, including package travel, cruises and hotel operations.

– A second British MP, Kate Osborne, Labour MP for Jarrow, in north-east England, said she has been diagnosed with coronavirus.

– People in the US are forming huge queues outside supermarkets. despite the White House appealing to Americans not to hoard supplies.

– The lead singer of The Killers, Brandon Flowers, posted a video on social media showing him washing his hands while singing Mr Brightside.

– A petition for doctors and nurses in the UK to be tested for coronavirus if they show symptoms has gained thousands of signatures.

– Education Secretary Gavin Williamson is meeting school leaders on Monday to discuss the implications of school closures and exams being postponed.

The idea of isolating those aged over 70 would “consign a particular cohort to misery”, former home secretary David Blunkett said.

Writing in the Daily Mail, he added: “I have real concerns that imposing isolation on the over-70s could be widely misunderstood in the current atmosphere of near panic.

“Just as people have begun to stockpile toilet rolls for no reason, an irrational notion could spread among the public that older people are being ordered to stay inside not for their own protection, but because they present some imaginary risk to younger people.”

Meanwhile, the PM will also on Monday ask British manufacturers including the Unipart Group to support the production of essential medical equipment for the NHS, such as ventilators which are desperately needed.

And he will speak to all G7 leaders, including US President Donald Trump and German Chancellor Angela Merkel, to discuss a co-ordinated global response to the pandemic.

Amid criticism over a perceived lack of transparency, Downing Street announced plans to hold daily televised press conferences, so either the PM or a senior minister can face scrutiny.

A Bill detailing emergency powers to deal with the outbreak is expected to be published on Thursday.