Civil servant did not trust complaints procedure to deal with Salmond, jury told 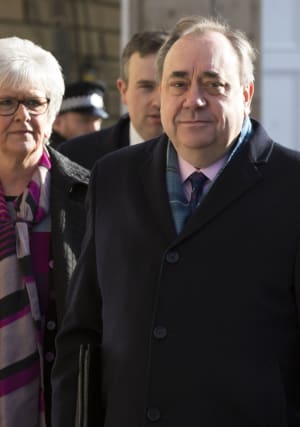 A Scottish Government worker has told a court he would not have “trusted” the civil service to handle “sensitive” complaints made against Alex Salmond.

Civil servant Christopher Birt told the High Court in Edinburgh on Monday there was a “culture” built up over a number of years and he had been “frightened” of the former first minister of Scotland.

His comments came after the court heard from an alleged victim who said Salmond grabbed her and it felt like “wrestling with an octopus”.

Salmond, 65, faces 13 charges of alleged offences against nine women, all of which he denies.

He was formally acquitted of a charge of sexual assault after the Crown offered no evidence, reducing the total from 14 charges against 10 women.

It was heard Mr Birt was aware of issues with Salmond but he did not trust procedures that were in place to handle them properly.

Gordon Jackson QC, representing Salmond, said his client could be inappropriate and this came “with the territory” of the position, which Mr Birt agreed with.

Mr Jackson put it to the witness there had never been “any thought” about contacting police.

The 37-year-old responded: “The culture built up over a number of years.

“None of the women felt like they wanted to complain, we felt in a very difficult position where it was difficult for us to do anything further because the civil service had allowed this to build up over time.”

He added: “Frankly, I can’t speak for the women but I can speak for myself.

“I would not have trusted the civil service procedures at that time to be able to handle such sensitive issues.”

Mr Birt is said to have raised concerns about Salmond with another Scottish Government worker, Joseph Griffin, who later gave evidence.

The 47-year-old claimed female civil servants were stopped from working at the first minister’s official residence, Bute House, alone with Salmond during the evening as a result of accusations made against him.

Earlier, a civil servant in the Scottish Government told the court she was assaulted by Salmond following a meeting in Bute House in 2010.

The jury was shown an image of a Christmas card design, featuring a man and a woman about to kiss beneath the mistletoe.

“There (were) two individuals on the Christmas card – the older male, taller with glasses and a younger female, who was quite scantily clad,” she said.

“I didn’t think the image was appropriate. It showed the female leaning up to kiss the gentleman.

“I didn’t think it was an appropriate image for the first minister and his wife to send out.”

The prosecution witness, known as Woman B, said she raised her reservations with Salmond and others at the meeting.

She explained: “My view was that the picture was too sexualised for him to send out.”

The court heard all those at the meeting agreed the image was inappropriate but the civil servant said she was assaulted when she was left alone in the room with Salmond.

“He immediately just said ‘let’s recreate the pose on the Christmas card’,” she said.

“He grabbed my wrists and pulled me towards him and I was just shocked.

“I used my hands to try to get him off.”

But the woman said she did not succeed, adding: “It felt like every time I managed to get a hand off another hand would appear.

“He was very persistent and it felt like I was wrestling with an octopus. I felt like there was always another hand.”

She told the jury the alleged assault ended when a colleague came to the door.

Woman B added: “I felt that if I had complained formally, then I would be the problem and I would be moved and I had worked really hard.”

Shelagh McCall QC, representing Salmond, suggested her client had been in a “playful mood” on the evening of the incident and asked if Woman B would describe the incident as “hijinks”.

The woman replied: “I certainly didn’t take it that way.”

The Crown case has now concluded, with the defence expected to lead evidence on Tuesday.