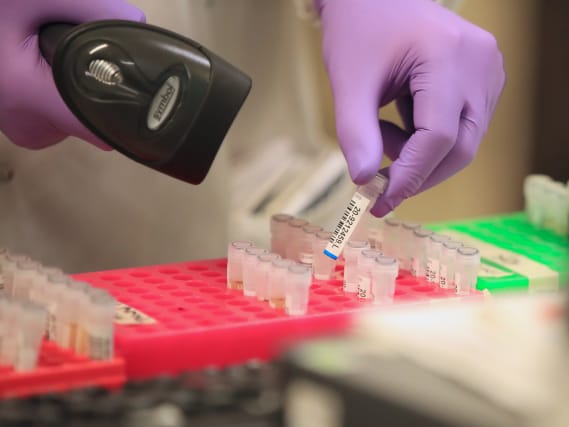 England’s chief medical officer has defended the Government’s position on testing people for Covid-19 after the World Health Organisation (WHO) said countries must “test, test, test”.

Professor Chris Whitty said there was “complete surveillance” testing in intensive care in the UK, while hospitals were also testing patients with pneumonia and GPs were testing in the community.

“We do intend to continue to scale up testing,” he said, adding efforts were already “substantial” with more than 44,000 tests conducted overall.

At the moment tests are only useful for people who are sick, but it would be “transformational” if there was a way to find out whether people had previously had Covid-19, he said.

That would show what proportion of people can get the disease without any symptoms, he said, adding that Public Health England (PHE) was “very rapidly” developing such a test.

As it stands, the UK does not have an accurate figure for how many people have Covid-19.

Future projections of the course of the pandemic in the UK will rely on modelling to provide an estimate, with only a sample of people being tested.

A cross-Government group has been set up to examine information from a variety of sources to provide publicly available estimates on the wider number of cases.

PHE has shifted its focus from close contacts of people who were infected to looking at outbreaks, such as those in care homes or prisons.

All hospital patients in critical care for pneumonia, acute respiratory distress syndrome or flu-like illness and all other patients requiring admission to hospital for these are also being tested.

Tedros Adhanom Ghebreyesus, director general of the WHO, earlier urged widespread testing to keep track of the pandemic, saying the agency has shipped almost 1.5 million tests to 120 countries.

Dr Tedros told reporters on Monday: “We have a simple message for all countries: test, test, test.

“Test every suspected case. If they test positive, isolate them and find out who they have been in close contact with up to two days before they developed symptoms, and test those people too.

“Every day more tests are being produced to meet the global demand.”

Dr Tedros told reporters there had been a “rapid escalation of cases” of Covid-19 globally in the last week.

“More cases and deaths have now been reported in the rest of the world than in China,” he said.

He said there had been “a rapid escalation” in social distancing measures, like closing schools and cancelling sporting events and other gatherings.

“But we haven’t seen an urgent enough escalation in testing, isolation and contact tracing, which is the backbone of the response.”

At the weekend Health Secretary Matt Hancock suggested more than 10,000 people had been infected in the UK.

The NHS in England is planning to ramp up testing facilities. At the moment, more than 25,000 tests have been conducted by PHE but it is hoped this will rise to 10,000 a day.

Campaign group Doctors for the NHS said much wider testing should be carried out for Covid-19, and other scientists have agreed.