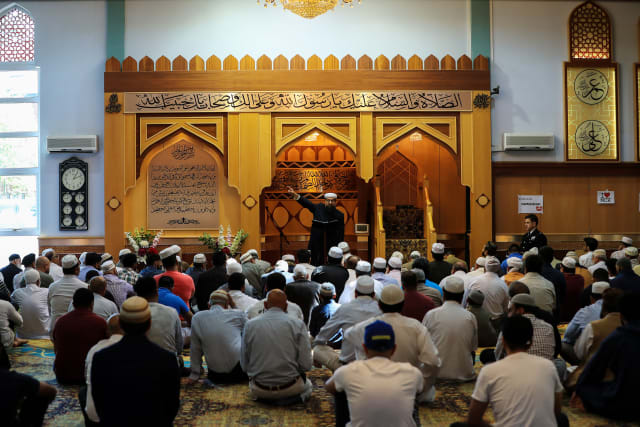 Cardinal Vincent Nichols, the Archbishop of Westminster, has said Catholic churches in England and Wales are preparing to suspend regular Sunday services and daily masses, while the Muslim Council of Britain said online services may be a way to keep in touch with a congregation.

The Church of England (CoE) said various “adaptations” are being made to the preparations for this year’s Easter services.

Foot washing, which usually happens on Maundy Thursday during Holy Week, and the kissing of the cross will not take place this year.

Audiobooks and online recordings have recently become popular among worshippers, according to the CoE.

The spokesman said: “We are looking at provisions for services online and recording audiobook services so people can use prayers at home.

“We already have Alexa and other smart speakers, which have been popular for prayers.

“Over the coming weeks we are going to be expanding the numbers of prayers that will be available because we are told they are popular.”

The Muslim Council of Britain has told officials at mosques, madrasas and Islamic centres to consider the potential different ways they might be able to safely reach worshippers if the outbreak worsens.

It is suggested they set up communication channels – which could include WhatsApp, Telegram, email, website, or social media – with the congregation.

They advise that some prayers and religious events could be shortened or suspended, if the public health bodies deem it necessary.

It has been suggested that another way to reach worshippers could be to broadcast some programmes or events online via live-streaming or a video link.

Cardinal Nichols told BBC Radio 4’s Today programme: “We are preparing for a time when the churches should not be used to gather big numbers of people together, so we might come to an end of the celebration of mass or other services, but in my view the churches will always remain open because churches are places where people can go.”

He believes the ability of a church to provide a place for someone to think and sit quietly will be “very important in the coming months”.

The cardinal said: “One of the great advantages we have now is that we can stream these celebrations, even if the priest is there with one helper, people can join in from home and gather if they wish on a Sunday to follow the mass, to say their prayers together in that virtual link with its formal celebration.”

Irish Catholics have already seen changes to the way they practice their faith during the coronavirus outbreak along with guidance on how they may stage big personal events such as a funeral, wedding or baptism.

Advice from the Irish Episcopal Conference suggests a 100-person limit on the number of guests who should attend a funeral, wedding or baptism at a church.

All confirmations have been postponed and non-essential spiritual gatherings such as retreats and seminars have been cancelled.

The advice also states: “In the current emergency situation, all are dispensed from the obligation to physically attend Sunday mass.

“Parishes should inform parishioners of the local possibilities to participate in mass via local radio and online.

“It may be possible for some parishes to facilitate attendance at mass while still observing the health authority’s limit of 100 people.”

It adds: “In these difficult and uncertain times, people find strength, consolation and hope in prayer. Churches should remain open for prayer each day.”